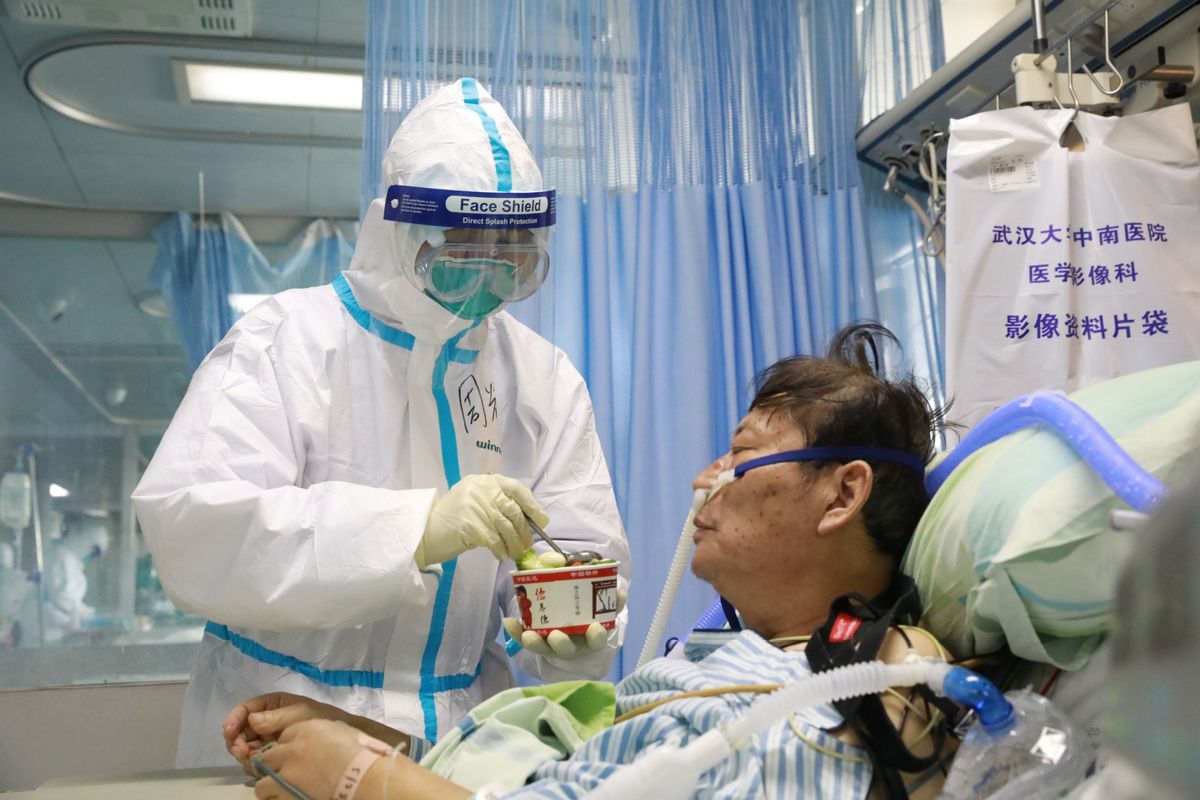 A nurse in a protective suit feeds a novel coronavirus patient inside an isolated ward at Zhongnan Hospital of Wuhan University, during the Lantern Festival, which marks the end of the Chinese Lunar New Year celebrations, in Wuhan, Hubei province, on Feb 8, 2020. (Photo: Agencies)

More efforts are needed to improve training for nurses in China so they can meet public demand, including in cases of emergency, the president of the Chinese Nursing Association said on International Nurses Day.

The number of registered nurses in China reached nearly 4.5 million by the end of last year, more than double the number 10 years ago, but in general they are not equally distributed. There is still a shortage of nurses in grassroots medical institutions and rural areas, said Wu Xinjuan, also head of the nursing department of Peking Union Medical College Hospital.

"We need to attract more young people to join the team so nurses can further meet the demand from the public in both quantity and quality," she said at a news conference on Tuesday.

Nursing schools and colleges need to improve curricula so they can better meet social demands, she said, adding that more training on public health should be given to students so they can cope with emergencies.

Meanwhile, more efforts are needed to intensify training for nurses to become capable of providing care to the elderly, rehabilitation services and community services, she said.

It is also necessary to improve integration between nursing schools and hospitals for training purposes so they can get as much practice as possible while studying, Wu said.

"We should also pay attention to the cultivation of nurses who specialize in a certain field and create good career prospects for them so they can become experts in their fields," she said.

Nurses have played an important role in fighting every major public health emergency, including the COVID-19 epidemic in China over the past few months, Wu said.

Of the 42,000 medical workers sent from across China to the front line in Hubei province, the most affected area in China by the pandemic, nearly 70 percent of them were nurses, and many of them worked in intensive care wards with high professionalism and expertise, she said.

Chen Zhen, chief nurse of Huadong Hospital, a major public hospital in Shanghai, was a member of the Shanghai medic team assisting Wuhan, capital of Hubei.

After arriving in Wuhan in late January, Chen first worked at a makeshift intensive care unit at Jinyintan Hospital, which was one of the first medical facilities designated to treat severe COVID-19 patients in Hubei province.

"We were outnumbered by patients, so we had to work long hours, and we were restrained from eating and drinking," Chen said. "We had lines marked on our faces because we wore masks and protective glass for a long time."

"It was still winter, but to make sure the room had fresh air, we had to open the windows and suffer the cold, and because of the lack of human resources, we had to do jobs apart from nursing work, such as carrying oxygen tanks, disinfecting the environment and cleaning the toilets," she said.

As a veteran nurse, Chen was paired with young nurses to take care of patients in severe condition and successfully helped doctors in rescuing many patients during her shift.

Chen, who has worked as a nurse for 20 years, said the Wuhan experience was very special for her.

"It made me reflect on the job of a nurse. It involves a lot of labor and danger, but it's a noble and worthy profession. I am proud to be a nurse," said Chen, who went back to Shanghai with her colleagues in March after completing the mission.