Nurse progresses from patient to protector 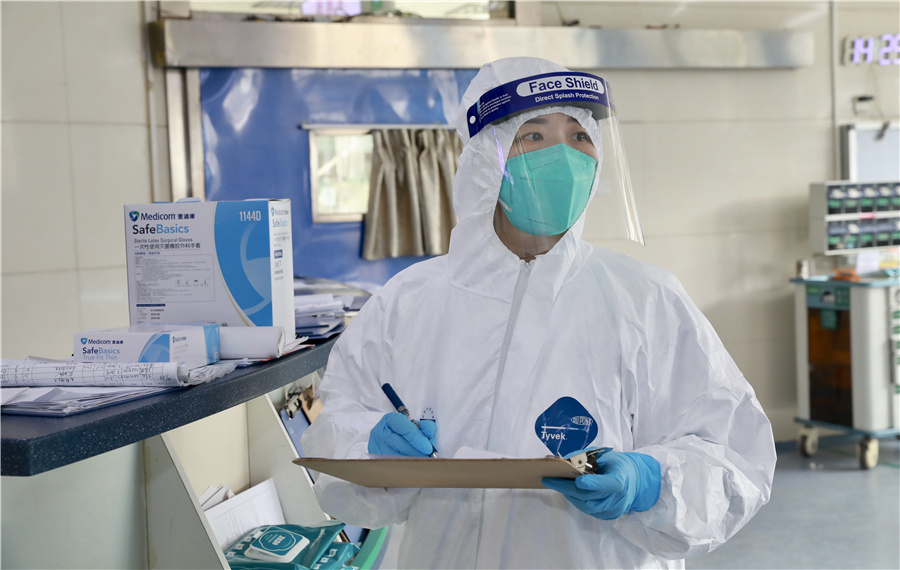 An experienced medical professional in Central China has returned to caring for her charges, having overcome her own illness. Liu Kun reports from Wuhan, with Li Hongyang in Beijing.

Editor's note: As the country battles to overcome the novel coronavirus, China Daily reporters have been hearing the stories of medical professionals tasked with containing and eradicating the disease.

Guo Qin, an experienced nurse in Wuhan, Hubei province, who became infected with the novel coronavirus at work, returned to her post after recovering from the illness, even though her head nurse and her family begged her not to.

The 38-year-old, who works at Wuhan University's Zhongnan Hospital, was diagnosed with the virus after developing a fever on Jan 12.By Tuesday, the virus had resulted in 490 deaths in the Chinese mainland, and there were 24,324 confirmed cases nationwide.

After three days' treatment and 14 days in isolation, Guo returned to the hospital on Jan 28 to help ease the burden on her colleagues.

On Jan 20, she sent WeChat messages to the head nurse saying she felt better and would like to return to work.

"I did this not to show that I am a hero, but to prove that I am not a deserter," she said, referring to her decision and the opposition she faced from her superior, parents and 11-year-old son.

Wuhan, the epicenter of the outbreak, has seen the number of cases surge in the past 10 days, reaching about 8,351 by Tuesday. In the days that followed the outbreak, Guo and her colleagues worked about 10 hours a day, all dressed in protective garments.

"We had contact with many confirmed cases every day, so it was hard to guarantee that we would not become infected. I only slept about five hours a day and didn't eat regularly, which weakened my immune system. I guess that was the main reason I fell ill," she said.

She didn't sleep a wink during her first night as a patient in the isolation ward because random thoughts filled her mind.

"That night, I felt nervous and fearful because the virus had just begun to spread among people, and I didn't know how bad the result would be. I even left my last words with my husband. I told him that if I died, he must take care of our son and parents," she said.

"Lying in bed, when I heard the ward alarms bleeping constantly and the pounding footsteps of my colleagues, I felt worried that I was unable to help."

Fortunately, the fever broke on just her second day in isolation, so she returned home, although she remained isolated and under observation.

"I took a good rest at home and ate nutritious foods such as fresh vegetables, fruit, meat and eggs. I also read several medical books, which made me feel confident and less stressed about the disease," she said.

When her condition had improved sufficiently, Guo returned to the hospital and discovered that a patient in her department had also recovered. A 53-year-old from Huanggang, Hubei province, who had been severely infected and fallen into a coma several times, was cured after 10 days' treatment.

"I was delighted to hear the news because it showed that the virus is not as frightening as people thought, and it can be cured. I know the number of patients in our hospital has fallen, so we should be confident about fighting off this virus," she said.