Seniors at nursing homes observed an unusual Lantern Festival on Saturday amid the national outbreak of the novel coronavirus and the unprecedented efforts to contain its spread. 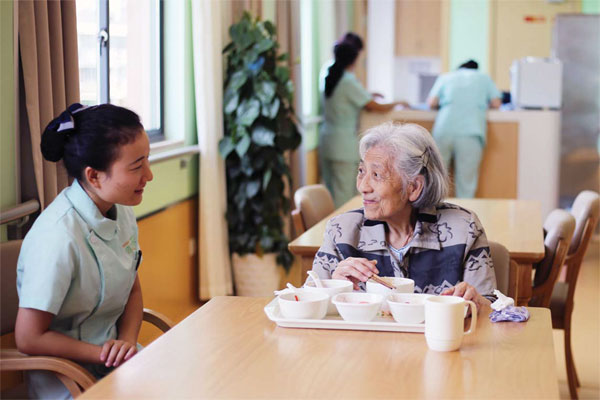 Normally, people invite parents to their homes for a sticky rice dumpling-themed dinner, which is meant for family reunions and other celebrations marking the end of the Chinese New Year festivities.

But on the first full moon in the Year of the Rat, aging parents were instructed to spend the day on their own since strict quarantines have been imposed over the past few weeks to keep the deadly pathogen out of nursing facilities and away from one of the most vulnerable groups.

At the Xinglong Retirement Home in Chengdu, Sichuan province, the cafeteria prepared rice dumplings for 56 seniors who might experience emotional slumps because they cannot be with their families. The rest home was sealed off on Jan 24, the eve of the Spring Festival, after confirmed cases continued to climb nationally.

"In response, we canceled the New Year vacation for all staff members," Di Xiaobing, the facility's director, told the China News Service on Saturday.

The outbreak disrupted celebrations during the Spring Festival, China's biggest holiday. Normally, tens of millions of people travel ahead of the festival for family reunions and sightseeing.

But to avoid cross infection, many have remained home and shunned gatherings to avoid crowds.

To keep seniors safe, Di said, they have closely monitored the body temperatures of the residents, whose ages range between 50 and 92. They have also required hand-washing before entering the cafeteria, increased the distance between tables and prohibited sitting face-to-face while eating in an attempt to reduce infection risks.

The Chengdu retirement home was just one of many such facilities across China that has made adjustments in response to the outbreak. The virus has killed more than 1,000 on the Chinese mainland as of Monday and has prompted authorities to lock down several major cities, including Wuhan, Hubei province, where it emerged in December.

To aid the adaptations, the Ministry of Civil Affairs released a guideline on Jan 28 on how nursing facilities should cope, detailing dos and don'ts ranging from entrance guards to psychological counseling.

The ministry updated the requirements on Friday, ordering regular temperature checks, discouraging seniors and staff members from leaving nursing homes without proper reasons and requiring operators to set up isolation rooms for returnees. Those who return should be placed under quarantine for 14 days－the time needed for infected patients to show symptoms including cough, fever and stomach issues.

The guideline gave detailed requirements for room ventilation, disinfection and food preparation. It also called for the monitoring of seniors' emotions and installing advisers for psychological issues.

The median age of novel coronavirus patients is 47, according to recent research conducted by a research team led by Zhong Nanshan, a prominent scientist who is leading a government-appointed panel of experts helping to control the outbreak.

The research, which was based on a sample of 1,099 patients selected from 552 hospitals across the nation, has found more than 25 percent of those surveyed have at least one underlying condition, suggesting that the elderly population was more vulnerable.