Dual epidemic threats are miring Xi'an, capital city of Northwest China's Shaanxi Province. As the city has been battling against the grave novel coronavirus, several reported cases of hemorrhagic fever, a natural epidemic disease with a high fatality rate, unnerved the public. 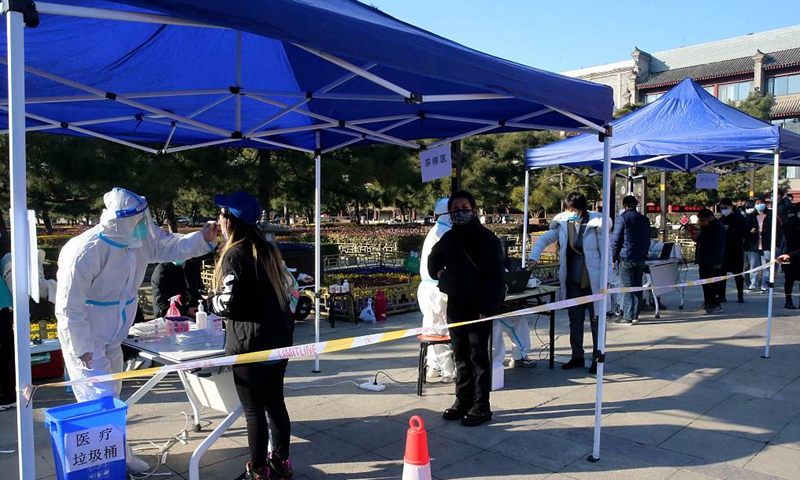 Local disease prevention and control departments and hospitals are facing challenges to combat the two epidemics, both contagious to humans. But experts told the Global Times that addressing this wave of COVID-19, characterized by the highly contagious Delta variant, is still the most prominent task, as the medical response strategy for hemorrhagic fever, which is commonly seen every year, has matured and compared with COVID-19, it is easier to diagnose and much weaker in terms of viral transmission.

Since the first COVID-19 case was reported on December 9, the city has registered 49 confirmed and eight asymptomatic cases. Over 16.2 million residents were given nucleic acid testing and a fresh round of tests will start on Tuesday.

Domestically transmitted cases that may have been triggered by an imported case from Pakistan have been reported in multiple districts and also involve a university. Cases in Xi'an that link to Dongguan, East China's Guangdong Province continue to increase, and sporadic cases were found to spill over to other regions, including Beijing, the National Health Commission said on Monday.

Meanwhile, to contain the emerging hemorrhagic fever, local CDC workers and hospitals are busy treating patients and distributing vaccines, which are the most effective measure to address the disease, media reports said.

A worker from a local CDC department told the media that while Xi'an is ramping up efforts to screen out potential COVID-19 infections, it also keeps treating patients with hemorrhagic fever.

The staffer said that except for himself, the department had sent all of its workers to handle epidemics, some for COVID-19, some for hemorrhagic fever.

The Global Times learned due to the recent COVID-19 outbreak in Xi'an, many hospitals with infection units have temporarily stopped receiving patients and are only attending to patients infected with COVID-19.

It is unknown how many are infected with hemorrhagic fever, an acute infectious disease characterized by fever, bleeding and renal damage, which can lead to death.

Yang Zhanqiu, a deputy director of the pathogen biology department at Wuhan University, told the Global Times on Monday that the dual epidemic threats heighten the pressure on working staff of the local disease prevention and control departments and hospitals. But hemorrhagic fever shouldn't have any chance to emerge as a big outbreak, or pose a great challenge for the city to respond as it did with COVID-19, as a mature medical response strategy has established.

Hemorrhagic fever is a common infectious disease that usually shows up in the winter in Shaanxi. Humans are generally susceptible to the disease, but it's usually confined to farmers or people who often work in the fields and the agricultural industry.

Compared with COVID-19, which requires multiple tests to diagnose, hemorrhagic fever is easier to diagnose, after urine and blood tests, experts said.

Yang said although the infection chain in Xi'an is ambiguous and community transmission of COVID-19 has been reported, the city is able to cope, as it held virus-free National Games and has accumulated a mature COVID-19 response mechanism.

Starting from Monday, all students in the city's kindergartens and schools stopped going to their classrooms, and for office workers to go their offices, a negative nucleic acid taken test within 48 hours must be presented.

Due to the huge number of visits the health code of Xi'an once collapsed on Monday for hours. The health code is an important gateway to check nucleic acid testing results.