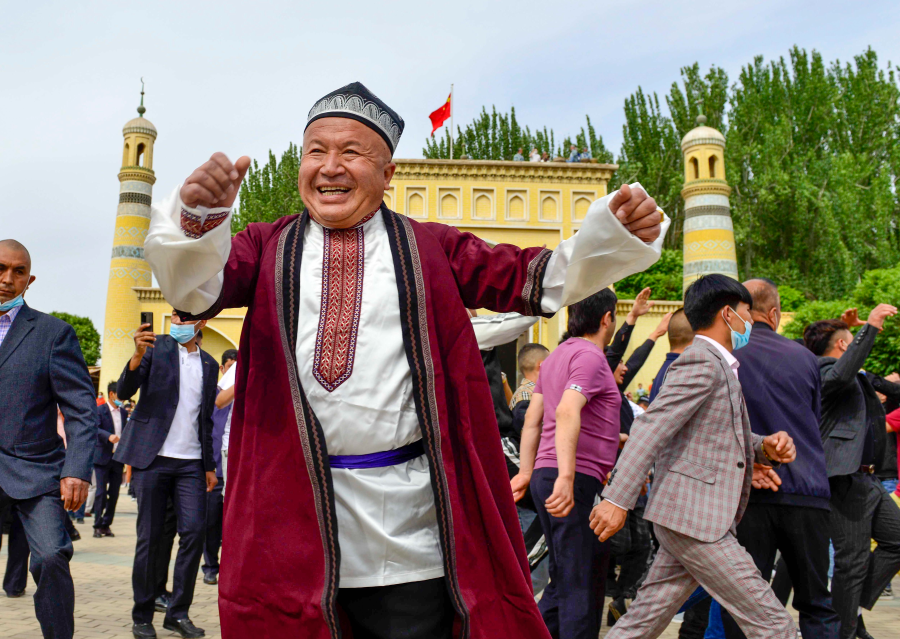 People dancing in front of Id Kah Mosque in Kashgar to celebrate Eid al-Fitr on Thursday. (Photo by Adiljan Abdukader/Xinhua)

Spokesperson Wang Wenbin made the remarks during a daily press briefing when asked to comment on some media outlets around the world which have successively published objective reports and rational academic articles about Xinjiang.

These articles generally point out that the so-called "genocide" in Xinjiang is entirely based on prejudice and hostility towards China, Wang said, adding that some people ignore the achievements of the Chinese government in governing Xinjiang and make a wanton comment on China's human rights situation, which is out of a political plot.

Relevant articles also point out that Xinjiang's cotton industry has already achieved large-scale automated plucking and there is no "forced labor" and no need for "forced labor," the spokesperson added.

Facts have proved that whether it is "forced labor," "forced sterilization," "genocide" or "mass sexual assault," they are all lies fabricated by anti-China forces, Wang noted.

"There is no factual basis behind such absurd accusations but only clumsy performances of a few pseudo-scholars and lame actors; there is no serious discussion, but only prejudice and emotional fanfare; there is no respect for the human rights of Xinjiang people, but only political manipulation that undermines Xinjiang's stability and attempts to curb China's development," Wang said.

"Lies can be uproarious for a while but they cannot escape being exposed eventually," he added.

Calling on the international community not to be deceived by the falsehood concocted with ill intentions, Wang said some experts and scholars have also pointed out that claiming "genocide" in Xinjiang will only make the world see through the ignorance and hypocrisy of the "human rights diplomacy" of the countries concerned.

"The door of Xinjiang is always wide open to the world. We welcome unbiased people from all walks of life and all over the world to visit Xinjiang, experience its vividness and help restore Xinjiang's genuine image," he added.