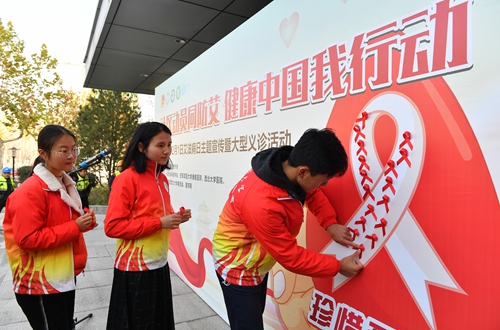 The "Chinese pattern" of treatment has helped reduce the mortality rate among Chinese AIDS patients in recent years and proved one of the world's most effective and cheapest methods in combating this deadly disease, Chinese experts said after the latest official report indicated the epidemic was still at a low prevalence level in China.

A total 958,000 AIDS-infected patients in China were reported by the end of October this year, according to statistics from the bureau of disease control and prevention at China's National Health Commission (NHC).

From January to October this year, 230 million people were tested nationwide of which 131,000 were newly found infected, said the NHC ahead of Sunday, the 32nd annual World AIDS Day.

The commission said that 86.6 percent of infected patients eligible for treatment received antiviral treatment, with a 93.5 percent rate of success.

China has made significant progress in AIDS prevention and control, especially in recent years, said Gao Fu, head of the country's disease control and prevention center.

China has been promoting HIV testing and scaling up, and has made notable achievements in strengthening HIV counseling and testing, said Wu Zunyou, head of the AIDS and HIV prevention and control center of China Center for Disease Control and Prevention.

The HIV diagnostic rate in China has soared from 21 percent in 2005 to 69 percent in 2018, and the inhibition ratio of the virus has reached 94 percent in 2018 compared with 85 percent in 2011, an employee from the Chinese Center for Disease Control and Prevention was quoted by China News Service as saying on Sunday.

New technology has also played an important role in bolstering the detection rate of HIV in China.

Newly developed test kits, which only require saliva and urine, have spared many the embarrassment of running to public institutes for a test, said experts.

In October, a research center in Xiamen University, along with Beijing Wantai BioPharm, a bio-pharmaceutical company, worked out a urine test kit which enables one to take an HIV test by collecting urine, and the result is out in 15 minutes.

In September, 10 government departments including the NHC introduced a three-year plan from 2019 to 2022 to curb the spread of AIDS.

The plan required AIDS treatment be included in a hospital's performance evaluation and encouraged hospitals to utilize the internet and other new technologies to provide long-distance consultation and treatment of the disease.

Premier Li Keqiang clarified in the instruction that all levels of government and departments should carry out their responsibilities to increase investment, make effective and down-to-earth efforts in ensuring treatment, relief and medical security for patients.

He said that more key problems in science and technology, such as drug development, should be tackled, while more humanistic care should be delivered to patients to keep improving their quality of life, according to an article published on China's State Council website on Saturday.

China is including more AIDS medicine in its medical insurance system, which has helped relieve the burden for some patients, Wang Ruotao, a former research fellow at the National Center for AIDS Control and Prevention, told the Global Times.

The NHC report found that the number of teenagers and elderly people infected with HIV was on the rise among reported HIV infection cases during January to October.

People aged 60 or older and infected with HIV has surged in recent years from 9.7 percent in 2011 to 16.46 percent in 2018, said Wu, noting the boom even outstripped the increase in the elderly population in the country.

Many elderly people lack safe sex awareness, believing that they need no protection as they already lost their fertility, said Chinese experts, noting that the elderly also don't have sufficient knowledge of AIDS.

Among cases of sexual transmission, men having sex with men (MSM) accounted for 23.3 percent of the newly infected AIDS patients in China from January to October this year.

It is estimated that one quarter of all people infected with HIV in China did not take a  test, or are not aware of the infection.

The public's awareness of AIDS urgently needed to be improved, Zhou Yuhui, an official from NHC's disease control and prevention center was quoted by media as saying.

Peng Liyuan, wife of Chinese President Xi Jinping and a goodwill ambassador of the World Health Organization for tuberculosis and HIV/AIDS, attended an activity related World AIDS Day at Communication University of China in Beijing on Thursday.

During the activity, she visited AIDS prevention volunteer services and encouraged attendants to contribute their ideas to keep AIDS out of campus.

To raise people's awareness of AIDS prevention and treatment, Tencent and the Chinese Association of STD and AIDS Prevention and Control, introduced an online game on Sunday which focuses on the lives of three AIDS patients and follows their treatment.