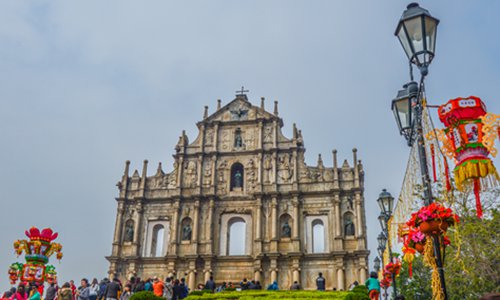 The implementation of the "one country, two systems" principle in Macao is a successful example and can be used for reference by Hong Kong, said an official from China's State Council over the weekend.

In practice, Macao not only follows the "one country, two systems" policy in basic spirit, but also creates extensive experience with Macao characteristics according to its society, Huang Liuquan, a vice director of Hong Kong and Macao Affairs Office of the State Council noted in a seminar.

The seminar was held in Peking University on Saturday to celebrate the 20th anniversary of Macao's return to the motherland. Huang and a number of officials from the Macao Special Administration Region (SAR) government attended the event, China News Service reported. Macao is also a Cantonese-speaking region and is geographically close to Hong Kong.

"The Macao SAR promotes patriotic education to the next generation and the public, letting its people have a stronger sense of national identity," said Tian Feilong, an associate professor at Beihang University in Beijing and Hong Kong studies expert.

Tian explained more of Macao's successful experiences of the "one country, two systems" principle, including the basis of law and the will of the people.

Macao passed the national security law, which took effect on March 3, 2009, and fulfilled Article 23 of the Macao Basic Law, Tian said. "And most Macao people have a more positive attitude to policies of the central government such as the Guangdong-Hong Kong-Macao Greater Bay Area."

Chief Executive of the Macao SAR Chui Sai On also said in September that Macao had become a successful demonstration of the implementation of the "one country, two systems" policy, the Xinhua News Agency reported.

Chui added that in the past two decades, Macao had benefited from the advantages of China's rapid development, and made use of it to achieve faster and higher quality growth.