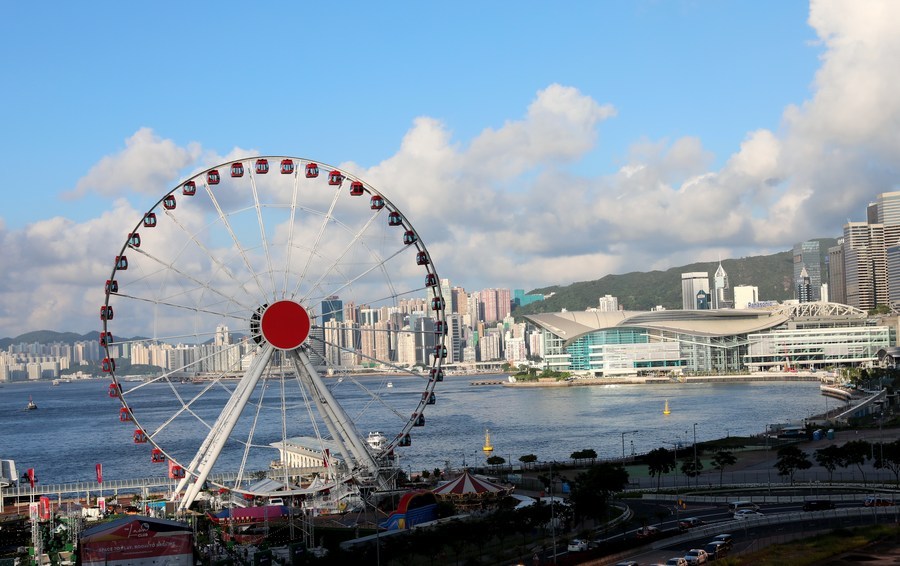 Photo taken on July 8, 2021 shows a view of a ferris wheel and the Hong Kong Convention and Exhibition Center in Hong Kong. (Photo: Xinhua)

The talk, which was held by a cross-departmental central government delegation, aims to help Hong Kong society better understand the national development strategy.

Hong Kong's development is closely tied with the nation's development, Lam said, adding that relying on the motherland and opening to the world are fundamental to Hong Kong's future success.

Lam said the plan, which supports Hong Kong in consolidating and enhancing its competitive edge, has inspired Hong Kong community and received positive responses from society.

Huang Liuquan, the deputy head of the Hong Kong and Macao Affairs Office of the State Council, said that the 14th Five-Year Plan showed that the central government attaches great importance to Hong Kong's economic development and livelihood improvement.

In the plan, the nation also supports Hong Kong to integrate into its overall development in various areas, such as finance and technology, Huang said.

The central government will continue to introduce measures benefiting Hong Kong for a brighter prospect amid the nation's overall development, he added.

Ning Jizhe, deputy director of the National Development and Reform Commission, said in a video speech that with the nation's greater support, Hong Kong is sure to gain more opportunities and achieve better development in the fields of finance, innovation and technology, and green technology industry.

Noting that Hong Kong has played a unique and important role in national development and served as a bridge between the mainland and the world, Ning said Hong Kong and the Chinese mainland will jointly develop by complementing each other's advantages.