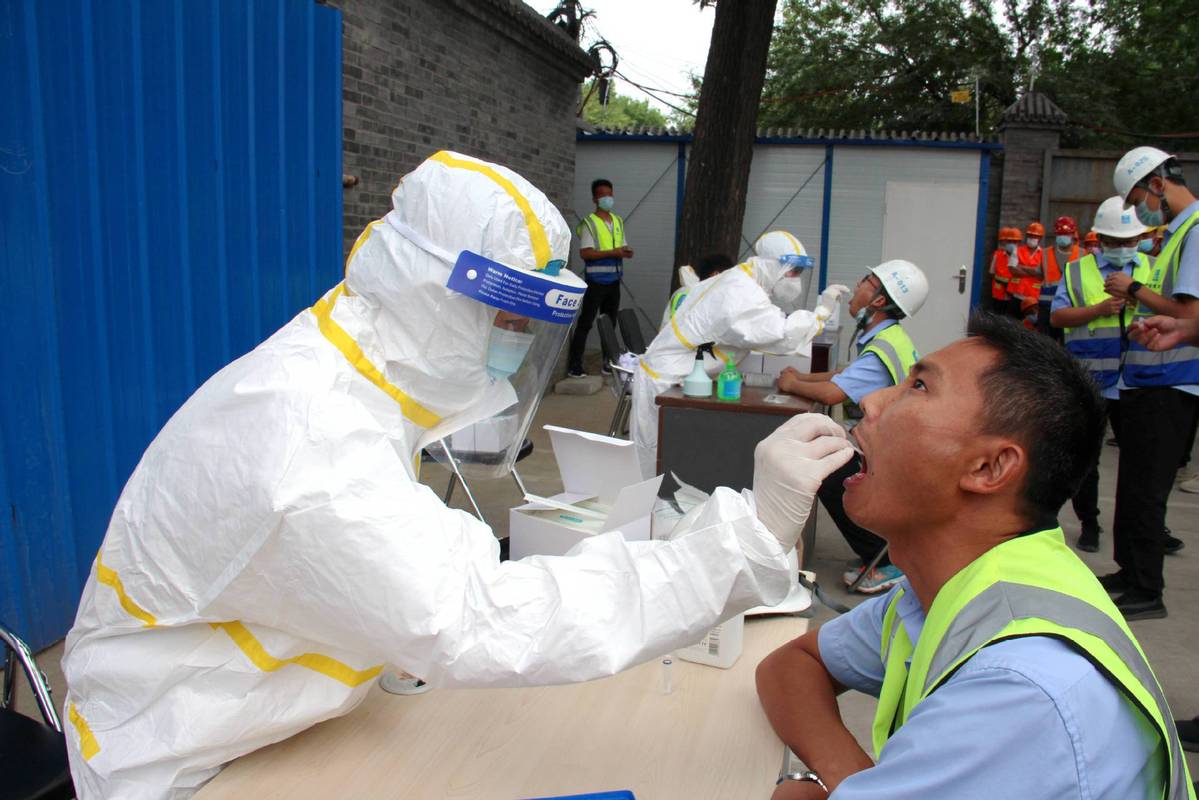 A construction worker takes a nucleic acid test for COVID-19 in Beijing on June 17, 2020. (Photo: Xinhua)

More than 90 million nucleic acid tests for novel coronavirus have been conducted across China, with testing capacity for the deadly virus increasing significantly, the top health authority said on Wednesday.

Multiple measures have been taken nationwide to boost the capacity to prevent and control COVID-19, including building testing labs and training testing workers, and the efforts have paid off, said Guo Yanhong, an official in the National Health Commission's medical administration and supervision department.

From June 15 to noon on Wednesday alone, the NHC and the Chinese Center for Disease Control and Prevention had provided online training on nucleic acid testing for the virus to 360,000 people across the country, said He Qinghua, an official in the NHC's disease control and prevention division.

The number of certified medical institutions providing nucleic acid testing for the coronavirus in China has increased from 2,081 in early March to 4,804, a rise of 131 percent, Guo said. The number of testing technicians has risen to 28,500, more than double the number in early March, Guo said.

These institutions, including hospitals and clinics, can now process 3.8 million samples daily, three times as many as in early March, she said. Expanded testing, which is necessary for early isolation and treatment of COVID-19 patients, has been seen as a key reason for the containment of the epidemic in China.

In Wuhan, Hubei province, only 200 samples a day could be handled at the start of the outbreak, but the number rose to 1 million by early June, according to the city's health commission.

After reports of six new confirmed cases in early May, Wuhan authorities provided nucleic acid tests for nearly 10 million residents in less than 20 days. No confirmed cases were found, and 300 asymptomatic cases were identified.

Early testing is crucial to preventing and controlling COVID-19, which is highly infectious and can be transmitted by those infected even before they display symptoms, Guo said.

A guideline released by the NHC in early June required local authorities to increase testing capacity for the virus so that anyone who wanted a nucleic acid test could have one.

"Nucleic acid testing is a most scientific means of determining coronavirus infection," said the NHC's He. "Expanding testing contributes to precise epidemic control and prevention and the proper movement of people, as well as promoting the thorough recovery of society and the economy."

Li Jinming, a researcher at the National Center for Clinical Laboratories, said testing for the virus can help early detection, reporting, isolation and treatment of COVID-19 patients, and massive testing aimed at key groups has played an important role in epidemic control in Beijing following the recent cluster of infections in the city.

Xu Hejian, a spokesman for the Beijing municipal government, said at a news conference on Wednesday that the city had confirmed 256 cases in the recent outbreak. The outbreak was linked with a major wholesale food market in Beijing, and the first confirmed case was reported on June 11.