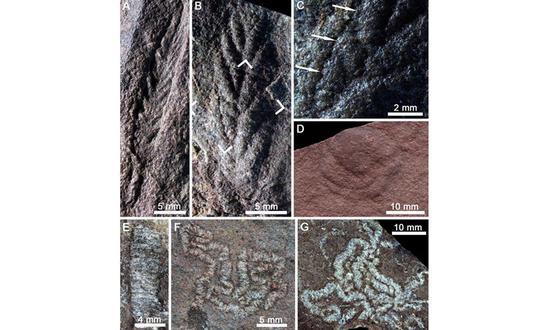 Ediacaran fossils of Charnia (A-C) and Shaanxilithes (Photo: Courtesy of the Nanjing Institute of Geology and Paleontology)

Chinese scientists and researchers announced on Tuesday the discovery of new fossils from the Ediacaran Period from between 550 and 539 million years ago in the Qaidam Basin, located in Northwest China's Qinghai Province. This is the oldest fossil record found on the Qinghai-Tibet Plateau, according to a statement shared by the Nanjing Institute of Geology and Paleontology with the Global Times on Tuesday.

It is the first time fossils from the Ediacaran Period are discovered in the Quanjishan Mountains of the northern margin of the Qaidam Basin.

The fossils were found during a field research in the Qaidam Basin in July 2020 carried out by researchers from the Nanjing Institute of Geology and Paleontology of the Chinese Academy of Sciences (CAS), Peking University, and Chengdu University of Technology.

The findings were published online on Monday on the comprehensive journal Geology.

"The discovery indicates that the Qaidam and the North China basins were close to each other and located in the middle and high latitudes, rather than the equatorial region as previously thought," a research fellow from the Nanjing Institute of Geology and Paleontology, told the Global Times on Tuesday.

"It is the second Ediacaran biota fossil site found in China after the first one was found in the Three Gorges region in the spring of 2011," the researcher said.

The Ediacaran Period had the most widely distributed complex biota in the world before the Cambrian explosion approximately 541 million years ago.

The Ediacaran fossils newly discovered are represented by Charnia, a segmented leaf-like lifeform, which is one of the most typical fossils of the Ediacaran biota.

Ediacaran macrofossils characterize the late Ediacaran Period and are pivotal in understanding the early evolution of animals on the eve of the Cambrian explosion and useful in late Ediacaran biostratigraphy.