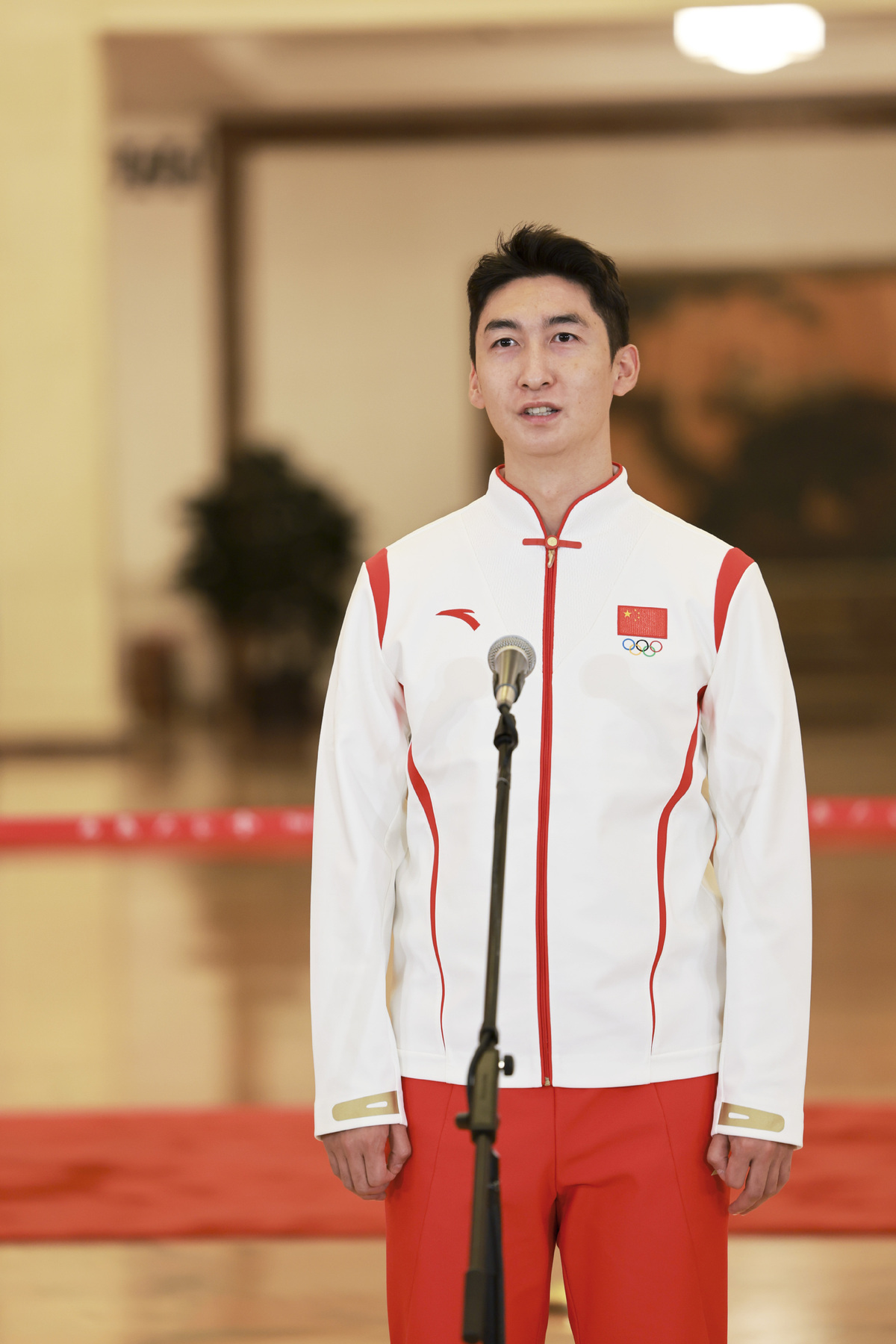 Wu Dajing, a delegate to the 20th National Congress of the Communist Party of China, speaks during an interview at the Great Hall of the People in Beijing on Oct 16, 2022. (Photo: Xinhua)

Olympic champion and Party member Wu Dajing has hailed China's progress in winter sports promotion inspired by the success of Beijing 2022 as the country thrives to build an international sporting power.

Eight months after winning his second Winter Olympic gold medal, Wu, a short-track speed skater, remains emotional when reflecting on how far the country has come over the past decade in promoting winter sports while preparing for the Beijing 2022 Winter Games, which took place in February.

"We now have more than 300 million people involved in winter sports and related activities and as many as over 1,400 indoor ice rinks as far as I know," Wu, a member of the Communist Party of China, said before the opening session of the 20th National Congress of the CPC in Beijing on Sunday.

"It's been a far cry since 10 years ago when we had less than 100 rinks across the country while even professional athletes like us had to wait until midnight for a window to practice on ice," Wu told media at the delegates' passage at the Great Hall of the People.

"We now have teammates speaking with accents from everywhere in the country rather than just 'Dongbeihua' (Northeast China dialect) back then," Wu joked about the wider representation of winter sports talent at the national camp.

Citing the game-changing progress in winter sports development, Wu took pride in facilitating the momentum by delivering world-class performances at Beijing 2022 along with his fellow Olympians on home ice and snow.

"I've seen children born in the warmer southern cities grow interested in winter sports and learn to enjoy skating after watching us compete at Beijing 2022," said Wu, who helped China win its first gold medal in 2,000-meter team relay in short-track speedskating on Feb 5 at Beijing 2022.

"This has motivated me to make further contribution to the development of winters sports by continuing training and competing to my best while taking part in more grass promotion events," said Wu, who shot to fame by winning his first Olympic gold medal in men's 500m at the 2018 Pyeongchang Games in South Korea.

Cheered on by enthusiastic home fans, the Chinese delegation won 15 medals, including nine golds, to finish third on the overall medal table at Beijing 2022, marking its best performance in history since the country made its debut in Winter Olympics at Lake Placid in New York in 1980.

According to the National Bureau of Statistics, the promotion of winter sports leading up to Beijing 2022 had resulted in 346 million Chinese people taking part in ice and snow sports and related leisure activities by the opening of the Games.

The General Administration of Sport of China, the country's top sports governing body, said the country witnessed a rapid improvement in winter sports infrastructure, equipment manufacturing and educational programs as part of the Games' legacy.

A total of 654 standard ice rinks and 803 ski resorts were operating in China by the start of last year, rises of 317 percent and 41 percent, respectively, from 2015, when Beijing and Zhangjiakou won the bid to host the 2022 Winter Olympics.

By the end of last year, 2,060 primary and secondary schools across China had introduced Olympic and Paralympic education featuring winter sports to their curricula.

"I believe with more people falling in love with winter sports, we will for sure develop a deeper talent pool for the national programs. This will only benefit our country's goal to developing a world sporting power in near future," said Wu.