Although Omicron - a new and more contagious COVID-19 variant - has arrived in Hong Kong Special Administrative Region (HKSAR) and caused three infections, local officials and experts are confident that the Chinese mainland-Hong Kong border re-opening plan is unlikely to be affected, as the city has prevented the local community spread of Omicron. 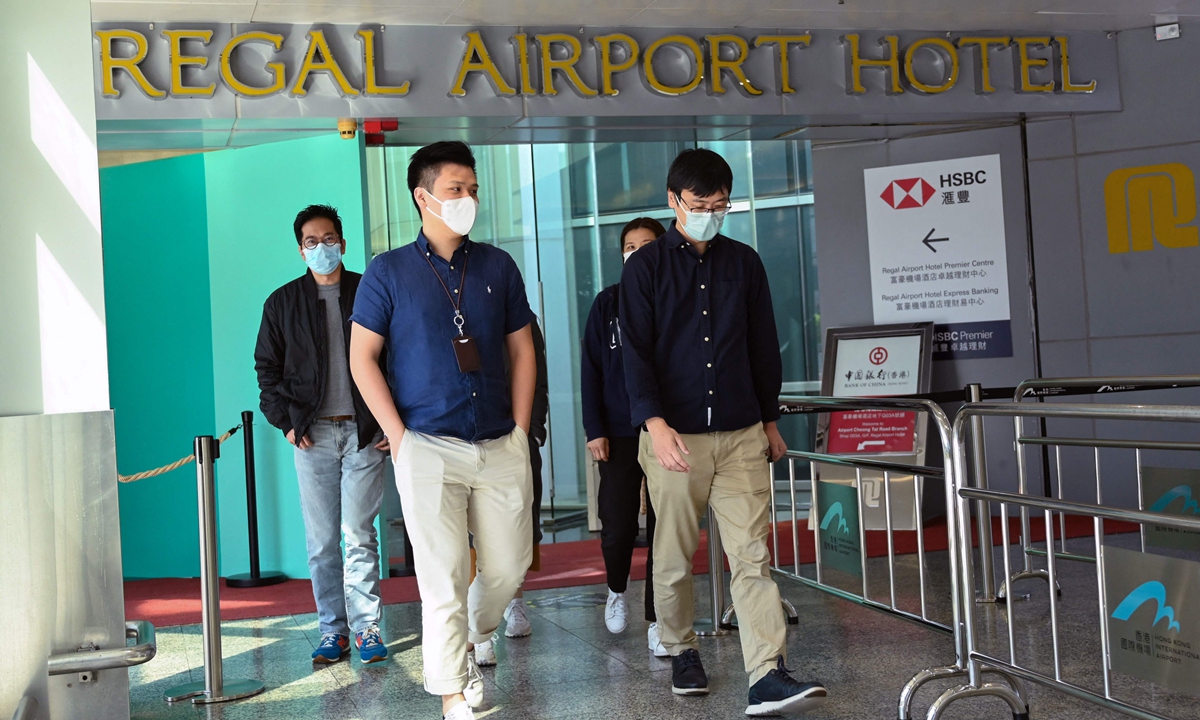 People leave the Regal Airport Hotel at Chek Lap Kok airport in Hong Kong on November 26, 2021, where a new Covid-19 variant deemed a 'major threat' was detected in a traveller from South Africa and who has since passed it on to a local man whilst in quarantine. (Photo: AFP)

Hong Kong on Monday reported another COVID-19 infection from the Omicron variant, bringing the total of Omicron infections in the city to three.

The third Omicron case is a 37-year-old man who arrived in the city from Nigeria on November 24 and went into quarantine in a designated hotel. He was confirmed with the virus on Sunday, said a Hong Kong official at a press conference on Monday afternoon.

Hong Kong's Secretary for Food and Health Sophia Chan Siu-chee said at the press conference that Omicron is currently not seen to have an impact on the border reopening plan.

"We have successfully detected those three cases, and prevented them from entering into our community," Chan said.

The Chinese mainland and Hong Kong are expected to resume quarantine-free travel as Hong Kong has basically fulfilled the requirements, and Hong Kong has entered the implementation stage for the orderly border reopening with the mainland, Hong Kong officials said last week, after an epidemic prevention and control meeting of the two sides.

However, the officials did not reveal an exact date for commencing quarantine-free travel.

Experts reached by the Global Times held a positive attitude toward the plan, despite the arrival of Omicron in the city.

Jin Dongyan, a professor at the School of Biomedical Sciences at the University of Hong Kong, told the Global Times that Hong Kong had detected an unusually high number of mutations in a variant before the Omicron variant was reported in Africa, and it thoroughly investigated the transmission route of the related cases, which meant that Hong Kong prevented the local community spread of the virus.

Kennedy Wong Ying-ho, solicitor of the Supreme Court of Hong Kong, said that "Omicron is unlikely to have big impact on the plan as Hong Kong has tightened its measures against imported infections."

When asked by the Global Times on Monday whether Omicron would affect the border reopening plan, Tam Yiu-chung, a member of the National People's Congress Standing Committee from Hong Kong, said "I hope not," noting that the variant had not been found in community in the city.

Chief Executive Carrie Lam said on Saturday that the HKSAR would launch a local health code for the interface with the health code in South China's Guangdong Province.

According to Lam, after the health codes are interconnected, once a confirmed case of COVID-19 is reported in Hong Kong, the mainland authorities can immediately notify related inbound persons through the real name-based health code.

The system development of the Hong Kong Health Code has been completed and is now undergoing final testing before going online. The HKSAR government will announce more details of the use of the code later this week.

According to a Monday report by local newspaper The Standard, Hong Kong's plan to reopen its borders with Guangdong and allow up to 1,000 HKSAR citizens daily to travel to Shenzhen or Zhuhai without quarantine may be further postponed to late December, with the HKSAR mulling to expand the quota to 5,000.

Media reports said that the HKSAR government is negotiating with mainland authorities to increase the daily quota of quarantine-free travel from 1,000 to at least 5,000, with a view of commencing the plan before Christmas or the Chinese New Year's Eve, which falls at the end of January next year.

The details of a suspension mechanism for the travel plan between the mainland and Hong Kong is still under negotiation, with the HKSAR hoping for the threshold of the circuit-breaker to be set at two cluster outbreaks instead of one single local case of COVID-19, according to media reports.