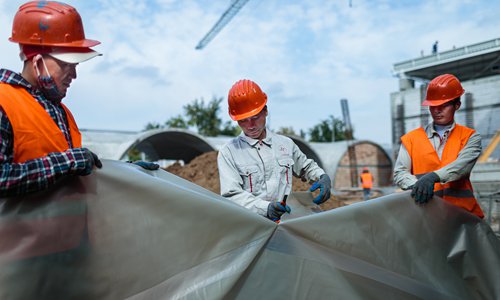 Vietnamese men work at the construction site on the roof of a block of flats in Bucharest on September 26. (Photo: AFP)

As the tragic Essex truck deaths in the UK drew global attention to Vietnamese stowaway groups, illegal border-crossing from Vietnam to China, a problem which was frequently unveiled since 2000 but has been largely resolved through joint efforts from both countries, has once again drawn the Chinese media's attention.

The Vietnamese smugglers tried to sneak into South China's Guangxi Zhuang Autonomous Region and then to Guangdong Province where low-skilled labors were needed at the time.

Around 2012, almost every day along the China-Vietnam border line in Guangxi, Vietnamese entered China through unguarded path, media reported. They then poured into factories in Guangdong and Fujian provinces by coach and train, filling in the gap of the labor shortage in China's coastal regions, the Economic Observer, a Chinese newspaper, reported in 2010.

The number of Vietnamese stowaways to China has slumped as the Chinese government tightened border regulations and cracked down on the human trafficking networks, officials from the Dongxing government confirmed to the Global Times.

China has also actively promoted cross-border labor cooperation with Vietnam in recent years, trying to offer a legal way for Vietnamese people to work in China and help them increase their incomes.

For young Vietnamese, working in China is becoming a safer choice and a promising future plan, according to some Vietnamese people reached by the Global Times.

At the Chinese border city Pingxiang, many small groups of Vietnamese often made their way back and forth through unguarded mountain trails near the entry port. Thousands of people travel there across border every day, the Economic Observer reported in 2012.

The influx of illegal workers from Vietnam has brought multiple challenges to China's social security and border management, according to Xinhua.

China's labor shortage is the driving reason why Vietnamese workers illegally enter the country. The number of illegal Vietnam workers reaches its peak during December to April every year during the sugarcane harvest season in Guangxi. There is a similar labor shortage prevailing in coastal cities of which the country's hard-working, low-wage workforce makes up for the demand.

In June 2013, Le Thi Dung and 16 of her fellow villagers entered Dongxing, Guangxi, via the Beilun River, the border river between China and Vietnam. Le Thi Dung comes from a poor village in Central Vietnam's Ha Tinh Province. It is her dream to earn a living in China. But their "Chinese gold rush dream" was shattered when they were seized by border police on the second day after they illegally entered China.

Le Thi Dung was told that she can make 2,500 yuan ($358) a month working in China, a great temptation for the girl who only earns less than 400 yuan a month in Vietnam. She then paid 1,482 yuan to smugglers for taking the risk, Xinhua reported.

"Some Chinese factories pay 'snakeheads' to find cheap Vietnamese labor. 'Snakeheads' use their Vietnamese contacts to find workers, lure them with high salaries, and then smuggle them across the border to work in factories in southern China," an official at the Fangchenggang Frontier Defense Police Station was quoted as saying by Xinhua.

"The smugglers are generally familiar with the border situation between China and Vietnam. They often take advantage of the all around trails in the border area to bypass the border checkpoints and sneak around at night, making it more difficult for border authorities to crack down," he said.

In response to the illegal entry of Vietnamese workers, China's border authorities have taken many recent measures, including strengthening inspection at border checkpoints and implementing the 24-hour duty system.

"The smuggling of Vietnamese into China was indeed rampant before 2015. But 2015 was a watershed year, as China and Vietnam cooperated to allow Vietnamese border residents to enter China's border areas to work legally with valid documents," Gu Xiaosong, an expert on Southeast Asian studies at the Guangxi Academy of Social Sciences, told the Global Times. "In this way, more Vietnamese workers are able work in China through legal channels, and their interests are protected as well."

Every morning, when the Dongxing port that connects China and Vietnam opens, Vietnamese workers with legal work permits line up at the port to cross the Beilun river bridge to start their day's work in China.

Vietnamese border residents can enter China with their border permit, and the whole process takes a little as 10 minutes, said Zhu Guangbao, the head of human resources and social security administration in Dongxing.

Since July 2015, China and Vietnam have cooperated to launch the pilot project of cross-border labor service in Dongxing, allowing Vietnamese workers to enter designated areas in China's border cities legally.

Zhu told the Global Times that there are around 10,000 Vietnamese workers in Dongxing, among whom 2,000 to 3,000 have a legal working permit. Most of them travel back and forth on the same day, earning money in temporary jobs such as cargo handling. These workers are mostly between 16 and 40 years old, and most of them are women.

Nguyễn Thi Ngọc, from Mong Cai in Vietnam, came to China and became a worker in a local printing house five years ago. She was soon promoted to be a manager due to her diligence.

"Vietnamese people like to go out to work in Japan and Singapore before, but now they are more yearning for China. I choose to work in China because of a more stable income and complete welfare," she told the Global Times. Before she came to China, she earned just over 700 yuan a month, but now her monthly income reaches 2,500 yuan, and she enjoys free food and accommodation. She is studying Chinese and hopes to gain an edge among her Vietnamese counterparts.

"Around 60 percent of the employees in my factory are from Vietnam, and most of them come here through referrals from old factory employees. If their technique is good enough, they can earn 10,000 yuan a month. We will also buy industrial accident insurance for Vietnamese workers," Peng Hailong, an owner of a redwood mill factory in border city Pingxiang, told the Global Times. "At least 40 percent of Chinese companies in Pingxiang employ Vietnamese workers."

In the border cities in Guangxi, it is common to see young and fashionable Vietnamese women workers as many local shop owners love to hire one or more young Vietnamese women as shop promoters. They can speak fluent Putonghua with a Vietnamese accent to attract visitors, a Guangxi merchandiser told the Global Times.

More and more young and educated Vietnamese people are moving from factories to global companies in office buildings in cities around China, Zhu told the Global Times.

Zhu said that Dongxing government departments have spoken with Vietnamese authorities and hope to extend the legal stay of Vietnamese workers from 30 days to 180 days, encouraging them to work steadily.

Chinese border and public security authorities are also meeting with their Vietnamese counterparts every year to discuss measures to combat illegal entry, stay and employment. Since 2018, some Chinese border cities have started to issue business licenses to Vietnamese private companies in China to attract more Vietnamese workers, Zhu told the Global Times.