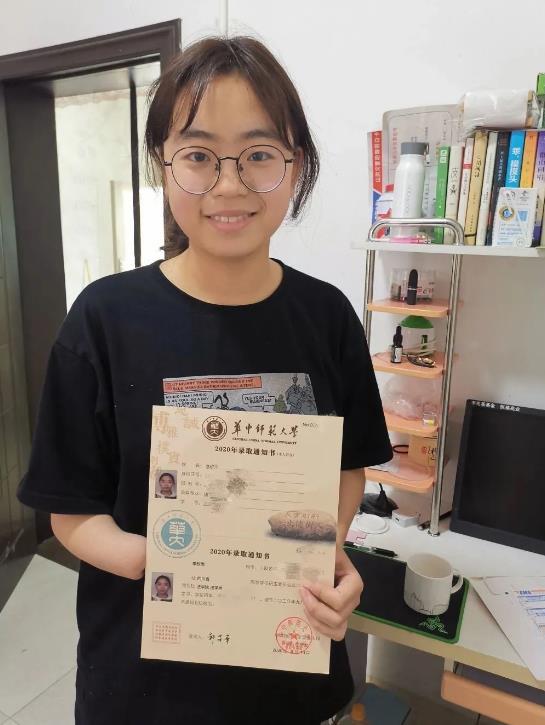 A 19-year-old girl from Mianzhu, Southwest China's Sichuan province, has shown the power of perseverance with her success in the gaokao and her story has moved many.

Li Xinyu has been admitted by Central China Normal University in Wuhan, Hubei province, and will study law at the university.

This was not easy for the girl, who lost her right hand in the Wenchuan earthquake in 2008, when she was only 7. She didn't give in to fate, but has overcome obstacles through unyielding efforts and great perseverance.

She started to practice writing with her left hand after the misfortune, and managed to write left-handed quite well in only three months.

Li's father said he had never seen his daughter cry. Even in the most painful times, it was she who often comforted the family. Her academic performance has always been excellent from primary school to senior high school.

In 2019, Li sat the gaokao, or college entrance examination, for the first time and her total score passed the threshold for top-tier universities. But she decided to take the exam again as the scores of several subjects didn't meet her expectation.

After a year of diligent work, she scored 625 in this year's gaokao and was admitted to her dream university.

After she got the offer, she didn't hesitate to call Zhu Jiaqing, who has been financing her living expenses since 2008, to share the good news.

Zhu, a senior from Yangzhou of Jiangsu province, was excited to hear the news and asked her about future study plans. He promised to keep supporting her as long as she is willing to pursue advanced studies.

Li said Zhu is among many kindhearted people who have helped her. She spoke of Auntie Shen Chunhun from Yangzhou, Uncle Pan, and several elder brothers and sisters from Chongqing.

Li seldom uses her cell phone in school, but always makes phone calls to them at holidays and festivals. She said they have been encouraging her in the phone calls very much like family members, making her feel very loved.

"I will grow up to be a person just like them, and help more people in need," said Li.

When asked about university life, Li said she'll definitely come across problems, but she'll hang on and overcome them one by one. She also plans to join student clubs, make more friends and experience a bigger world.

She looks forward to starting her university life in Wuhan and chasing her dreams there.