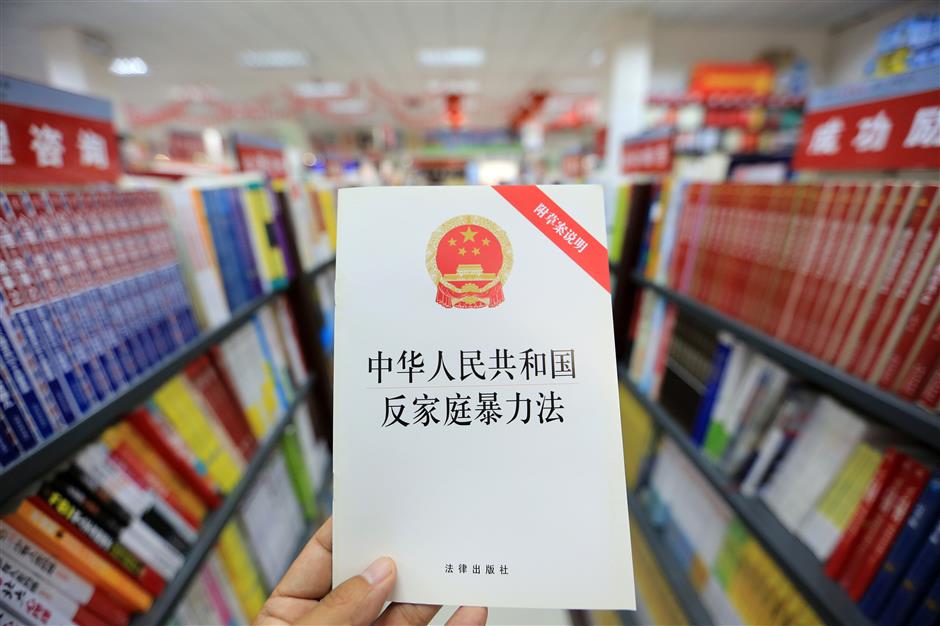 Under this initiative, police officers are required to respond immediately to domestic abuse calls, civil affairs administrations are expected to provide refuge, health commissions identify injuries and the courts can issue writs. As the initiator of this platform, the Hangzhou Women’s Federation is going to provide follow-up assistance and counseling.

Since the country’s first law against domestic violence came into effect two years ago, the number of family violence cases reported has increased in the city.

“That doesn’t mean the spousal abuse situation is getting worse,” said Chen Liaomin, vice justice of the Xihu District People’s Court. “On the contrary, it shows that more brave women are taking a stand and accusing their husbands of domestic abuse.”

Recently, Chen was temporarily transferred to the Hangzhou Women’s Federation and put in charge of women’s protection.

As she learned more about the state of family violence in her new role, she came up with the idea of the online platform.

“The family violence cases in the courts are far fewer than what I have seen in the women’s federation,” said Chen. “Many victims failed to file a complaint due to lack of evidence.”

Solid evidence is vital, especially for writs of habeus corpus. Last year, Hangzhou only issued a few writs, because the courts must check the evidence quite rigorously.

“Many victims didn’t have an idea of what valid evidence really is,” Chen said. “Some of them even brought diaries that depicted the then situation to accuse husbands of abuse. That cannot work.”

On the platform, users can upload voice recordings, videos and photos to support allegations of violence.

“The best way to protect yourself when suffering domestic violence is reporting it to the police as soon as possible,” Chen said. “A police investigation could prove the evidence, and help victims if they later decide to file for a divorce conciliation or a lawsuit.”

Jianggan District police adopt a three-level mechanism to protect victims and crack down domestic violence. Punishment varies according to seriousness of the abuse.

“A warning writ will be issued if a man is found abusing for the first time,” said Liao Erhui from the Jianggan District Police Bureau. “If reported for a second time within a year, he will be summoned to the police office. The abuser will be detained for three to 15 days if he is accused of beating his wife a third time and causing slight injuries.”

The three-level mechanism has proved out effective in lowering abuse rates. Last year, Jianggan District has issued 667 writs, summoned 127 and detained five abusers. The cases have dropped 31.9 percent, and the second reporting cases reduced 53.8 percent compared with 2016, according to the report of China Women’s News.

“Some of the accused fear that the writ may bring some trouble when they apply for visas to other countries,” said Liao. “Actually it won’t. But the fear shows that the writ is working. But we acknowledge that some victims have been too ashamed or afraid to step forward. There is still much violence hidden in families.”

The mechanism is being implemented across Hangzhou and it is hoped publicity will also help reduce physical and emotional abuse.

Emotional abuse has been relatively neglected.

“Formerly, the public had wrongly considered domestic violence as something that happens in families that are not very well educated,” Chen told Shanghai Daily. “Actually, a number of spousal abuse cases, especially emotional abuse, occur in well-off, educated families.

“The root cause of domestic violence exists in abusers. Many of them beg for forgiveness after abusing, but continue to do it tomorrow.”

The women’s federation is working with the Hangzhou Detention Center. Abusers detained there have had psychological counseling.

Spousal abuse has traditionally been considered a “family matter” across China. Outsiders were considered to be meddling if they got involved.

“The situation has changed,” said Chen. “Many police calls come from strangers and neighbors. Family violence is no more a private matter in the public consciousness.

“More and more people feel responsible to stop the violence. That helps cut down abuse in residential communities and public space.”

Since they have no ability to protect themselves like adults, members of the public have the right to stop violence against children and report it.

“Organizations including schools, welfare institutions and medical facilities are expected to report to the police if they become aware of a domestic violence case involving a child,” said Chen. “For instance, if teachers don’t report suspicious abuse of a student to police, they can be held legally accountable if serious consequences occur due to negligence.”