During lunchtime on a weekday, Xu, who works in a standard white-collar office building, walked to a trash can and threw a takeout box in it. What was clear to others around was that the box still contained a decent amount of food. 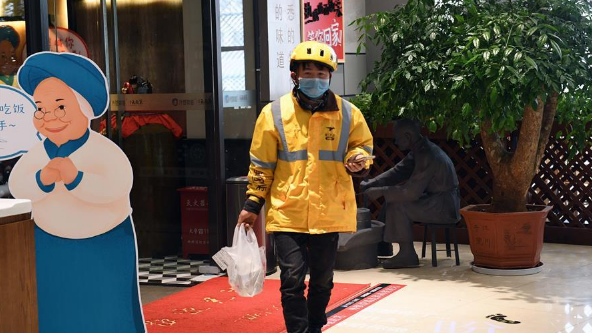 Takeout deliveryman walks out of a resturant. (Photo: Xinhua)

"We don't have a canteen in our office and I'm tired of the nearby restaurants. The only option left for me is to order takeouts," Xu said. "It is not uncommon to see people failing to finish their takeout meals. For those who have a small appetite, they can't even finish the staple food designed only for one person. And for those who find the food unpalatable, they won't be able to finish no matter how small the portion is."

Many like Xu, who regularly order takeouts from online platforms, are facing challenges in keeping up with a global campaign that aims to eliminate food waste.

Unlike dining in, it is difficult for consumers to estimate the weight and taste of the meal when ordering takeout online, which has made the efforts to avoid leftovers a lot harder. However, many businesses that operate on takeout platforms have begun to launch single-person meals and show on their pages how much each meal weighs. Large "hard dishes" such as pickled fish and beef stew are increasingly available in smaller portions.

While offering the cut-down versions of meals does help prevent food from going to waste, it is not without its constraints. The dishes in these single-person combos are often fixed, said someone who frequently orders takeouts. "It is still not like a canteen, where you can choose the volume of your dishes at will. It is always convenient to ask the canteen chef for less rice or one chicken leg instead of two, and for those who order takeouts in their office, it's not easy to preserve leftovers, so they can only throw them away."

For restaurants with takeout services, it is quite difficult to meet the diverse needs of all consumers due to the large number of orders especially during peak dining periods and given the tight delivery time. One restaurant manager said it is impossible for restaurants to contact every customer. Some consumers have a bigger appetite and some don't, so "we can only customize a moderate portion," he said.

Data from Meituan, China's most popular takeout service APP, shows that since August this year, the sales volume of "small portion dishes" has increased by about 30 percent compared with July. But many consumers say purely offering such portions is not enough and there is still room for improvement.

As restaurants tend not to set small portions for all their dishes out of cost considerations, consumers note that they are stripped of the opportunities to try other dishes out, because doing that may risk wasting food. Wang Chunfang, a white-collar worker in Shanghai, believes that since many restaurants offer flavor choices, they should also give size options so that customers can choose for example a 50 percent - or 70 percent - full dish.

Consumers also point out that restaurants' promotion plans have inadvertantly contributed to food waste. Many restaurants offer discounts to customers in order to stimulate consumption, mostly through offering an option that allows customers to pay less than priced after their total bill exceeds a certain amount.

Takeout service users say sometimes they are one or two yuan short off that amount, and in order to get the discount, they will order an extra steamed bun or perhaps a snack. But the extra food is often not finished and may just be thrown away. This kind of food waste requires more careful control by takeaway platforms and restaurants.

Last but not least, people have also questioned the lack of supervision on takeout platforms.

"I find that although the info on each meal's weight is marked, it is still difficult for consumers to actually gauge whether they will be able to finish the meal or not," said Ai Siying, a college student who often orders on takeout platforms. "When dining in a restaurant, there are waiters who can help you check the portion size, but the online takeout service lacks such reminders and adequate supervision. I think these platforms should require consumers to fill in the number of people having that meal, so that it can help evaluate whether the order is oversized before payment."

Han Shuo, a representative from Meituan, said that the platform will work to ensure the dining scene is further complemented and the package grading is more refined.

The platform will also enhance interaction between consumers and businesses, and make algorithmic recommendations based on consumers' feedback and evaluation data to help businesses better understand them, he added.

Some consumers said they hope online takeout platforms and businesses will double scrutinize the reasonableness of food portions and pricing, and that prices should match the size of meals. "If the size is small but the price is high, it will ultimately harm the interests of consumers and it will not benefit the sustainability of the anti-food waste campaign."