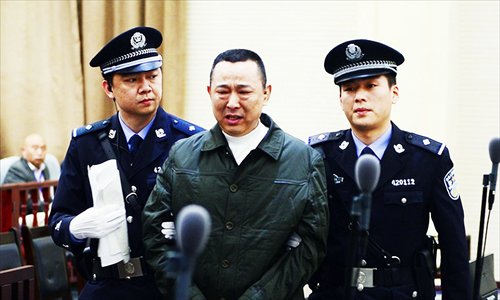 Liu Han, alleged head of a mafia-style gang and a former mining tycoon, bursts into tears during a court hearing in 2014. (Photo: IC)

China's central law enforcement authorities will begin the second phase of its anti-gang campaign that is targeting organized crime in 21 provincial-level administrations across the country in the first half of this year.Chen Yixin, secretary-general of the Commission for Political and Legal Affairs of the Central Committee of the Communist Party of China (CPC) announced the new drive at a conference in Beijing. It will begin in early April and last until early May, covering places such as Tianjin Municipality, South China's Hainan Province and Northwest China's Xinjiang Uyghur Autonomous Region, according to a post on WeChat public account Chang'anjian, which is affiliated with the committee, on Thursday.The third phase will start in early June until early July, and cover Southwest China's Tibet Autonomous Region and Shanghai and Beijing municipalities, said Chang'anjian.This year's campaign will target the "protective umbrellas" of gang crimes, and authorities should check whether those who protect gangs have been taken down along with the gangsters, Chen said. He also mentioned new types of gang crime, such as online loans and other cyber gang crimes. For these crimes, authorities should carefully check the evidence and application of law, and ensure every case is supported by solid evidence, Chen stressed.Li Shaoping, deputy head of the Supreme People's Court (SPC), said during this year's two sessions that the SPC is trying to fill gaps in the law when it comes to dealing with organized crime. The first phase of the gang crackdown started in July 2018. The person heading the anti-gang squad is usually a ministry-level official, said Chang'anjian.Ten provinces were involved in the first phase of the campaign, which finished at the end of December 2018. The operation netted assets of 4.94 billion yuan ($740 million) gained through criminal activities, and 100 gangs were taken down.