CHINA Ordering US companies to withdraw from China hurts the US itself: MFA

Ordering US companies to withdraw from China hurts the US itself: MFA

Ordering American companies to withdraw from China is more like a political slogan rather than a pragmatic move, and will in the end hurt the US itself, the Ministry of Foreign Affairs (MFA) spokesperson Geng Shuang said on Monday. 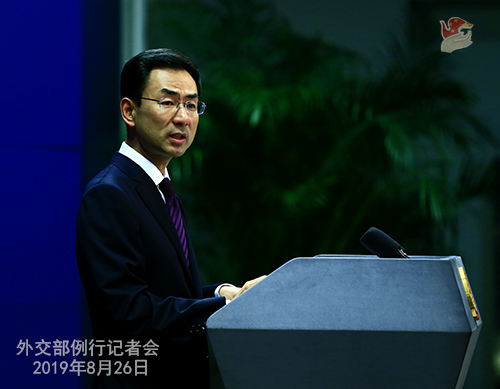 US President Donald Trump said on Twitter, "American companies are hereby ordered to immediately start looking for an alternative to China, including bringing your companies home and making your products in the USA." Yet no concrete actions have come into effect.

In response to this, Geng made remarks at a MFA regular press briefing. He stressed that the "decoupling" between the Chinese and American economies is not a good way to ease Sino-US economic and trade friction, nor is it a way to solve the problems of the US itself. A forced decoupling will surely disrupt the existing world economic chain, lead to chaos in global markets, and endanger international trade and global economic growth.

China and the US are now each other's biggest trading partner and important investment destination. The sales revenue of American companies in China topped $700 billion and their profits reached over $50 billion in the year 2017 alone.

In the first five months of this year, Germany, South Korea, Japan, and the UK increased their investment in China by 100.8 percent, 88.1 percent, 18.9 percent, and 9.2 percent respectively. EU investment in China grew by 29.5 percent. "Decoupling from China is decoupling from opportunities. Even if American companies withdraw from China, there will naturally be others to fill in the gaps," he added.