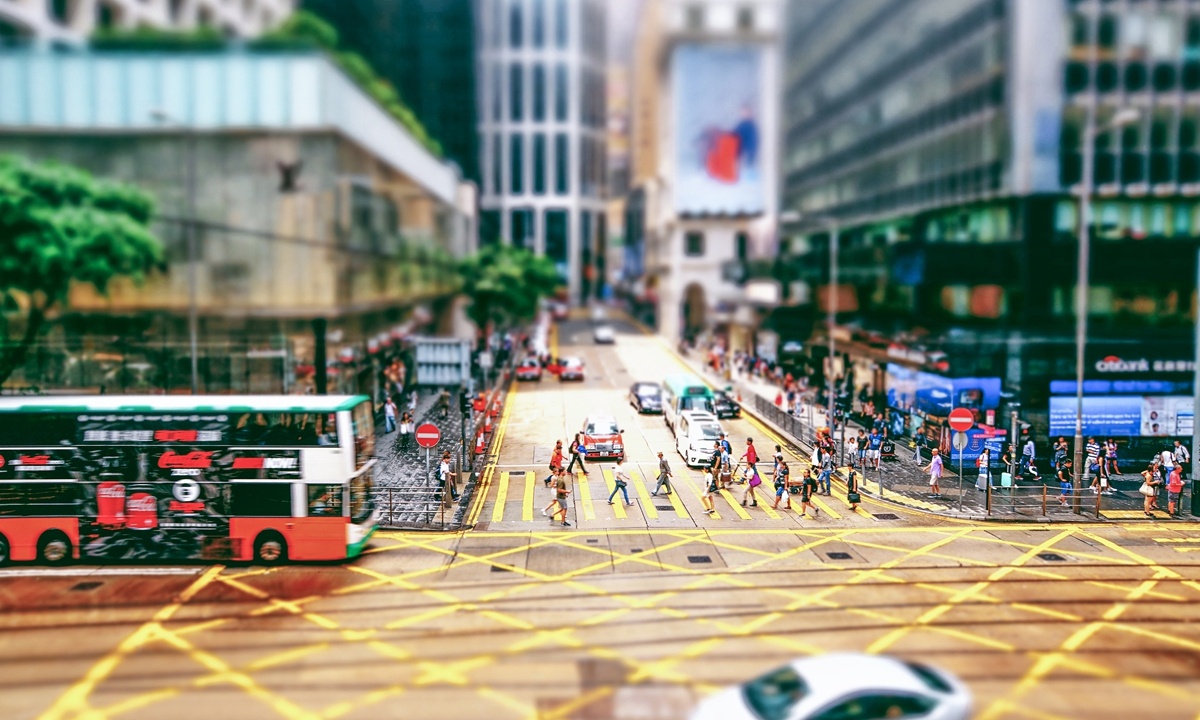 Ordinary Hong Kong residents have likened the national security law for the Hong Kong Special Administration Region to a silver bullet or a guardian able to protect their peaceful daily life and freedom to speak up.

After the national security law for Hong Kong was passed at China's National People's Congress, the road home for many has become safer. Wong is one of them.

As a high-school teacher in Hong Kong, Wong, who is only known by his surname, did not experience the fierce riots last year on the way to school as they mostly happened in the summer holiday, but his road home also had some risks.

"My wife and I once took our child to Tuen Mun and after playing for around half an hour, we saw some people wearing black clothes gathering," Wong recalled to the Global Times.

In consideration of protecting their child, Wong and his wife decided to rush home instantly, but they found it difficult.

"When we arrived at the bus station, the police and rioters had begun to confront each other and the road was blocked. We did not see any bus, and no private cars were on the road."

They had to run and leave as soon as possible by themselves. The family ran for half an hour and hopped on the first bus they could find to Yuen Long.

This was not the only time Wong had difficulty getting back home. "Once I chatted with a friend in the Tsuen Wan district and planned to call a vehicle on Uber after finishing dinner, but few cars responded to my order."

Wong said he was forced to offer a taxi fare three times the usual cost because few drivers were willing to go to Tsuen Wan given the risks.

After the national security law for Hong Kong was passed, Wong's road home has become safer and more peaceful.

"There are still some protests but almost all of them are peaceful. Those people who have different views just shouted some slogans," Wong noted, adding that the security law for Hong Kong is like a safeguard for their life.

The road to work for Venessa Yu, a Hong Kong resident who works in the bank insurance industry, was also dangerous before the law was passed.

"Each day at that time I hoped I would be able to have a smooth commute," Yu told the Global Times, but she still usually came across violent actions by rioters, like damaging traffic facilities and blocking the way.

Since the law was passed, Yu has felt relieved on the way to work and at home. "The national security law for Hong Kong is like a silver bullet for me, allowing me to say what I truly think."

Speaking up easily and loudly

During the riots in Hong Kong, Yu attended some voluntary activities including cleaning illegal slogans and fixing damaged traffic facilities, but she had never appeared in front of the TV cameras as she was afraid of being exposed to rioters and also feared that her family members might be affected.

Even though she avoided appearing in front of the public, her active participation in the voluntary activities still caught the attention of some rioters and her private information has been exposed five times.

Yu recalled that she received several threatening letters from rioters and some photos of her  attending voluntary activities to oppose violence were also posted online.

Then her Facebook account was exposed and some netizens commented and accused her on social media. "A man stalked me for a long time until I even remembered what he looks like."

This time, when interviewed by the Global Times, Yu sent some of her photos voluntarily and said the national security law gave her courage to face the media. "Now I am not afraid of anything. I can safely express my own opinion and will not be hurt by these rioters."

Wendy Yu, who came back to Hong Kong after immigrating to Britain, has similar feeling to Venessa Yu.

She felt that she had regained the freedom to express herself when the national security law for Hong Kong was passed.

Wendy Yu went with her father to immigrate to Britain in the 1990s but as she found she was just able to be a "second-class citizen" in the country, she returned to Hong Kong after three years to work as an operations manager.

"Plagued by violent riots for over one year, the moment the law took effect I was very excited. On the first day of implementation of the law, we could walk on the streets and sing the national anthem openly and happily to celebrate the 23rd anniversary of Hong Kong's return."

What people of different ages think

ople in different age groups expressed their support for the national security law for Hong Kong when interviewed by the Global Times. Besides Wendy Yu who has already retired, Lancy Wong, a graduate from Hong Kong Baptist University majoring in psychology, shared her views.

"After the national security law for Hong Kong was passed, I am more optimistic about Hong Kong's future as a young person."

Lancy Wong and her friends and relatives suffered from verbal attacks during the riots as they had different views from the rioters, which strengthened her support for the national security law for Hong Kong.

"People around me feel more secure and happier now, and many ordinary residents signed their names to support the law on the streets," Poon said. "The social order and public security is obviously getting better, which is a benefit to most residents."

Jacky Ko Chung-kit, a key opinion leader running a multimedia production studio, also cheered the legislation. He posted congratulatory messages on social media when the law was passed and voluntarily greeted a group of deputies from the National People's Congress (NPC) at the airport, who returned to Hong Kong after attending the NPC Standing Committee meeting in Beijing.

Ko was resolute in his explanation to the Global Times that thanks to the new law he now has more courage to express his opinions. Rioters who had been violent and damaged public facilities should be condemned, Ko said, and now he is able to condemn them without any concern.

"I saw there was a phone survey conducted by a local organization from July 2 to 5," explains Ko. "Among 1,097 ordinary residents aged 18 or above, 66 percent of the respondents expressed strong support for the national security law for Hong Kong." He felt this investigation was representative of many Hong Kong people's attitudes.

Some people still have questions about the law in Hong Kong, which was mentioned by the high-school teacher and the graduates.

Lancy Wong said some of her friends still worry that the law will violate their rights: "I try to tell them the law will protect all of their legal rights instead of violating them, so there is no need to be afraid."

After the law was passed, the teacher's students with different views have not stopped quarreling with each other online.

To better explain the law and let these students understand it, the teacher suggested recruiting more patriotic teachers, who truly understand relations between the Chinese mainland and Hong Kong, to gradually impact students.

"Do not just tell these young students how strong China is but talk about both achievements and problems. Let them know how difficult it has been for our country to develop to the present situation," the teacher said.