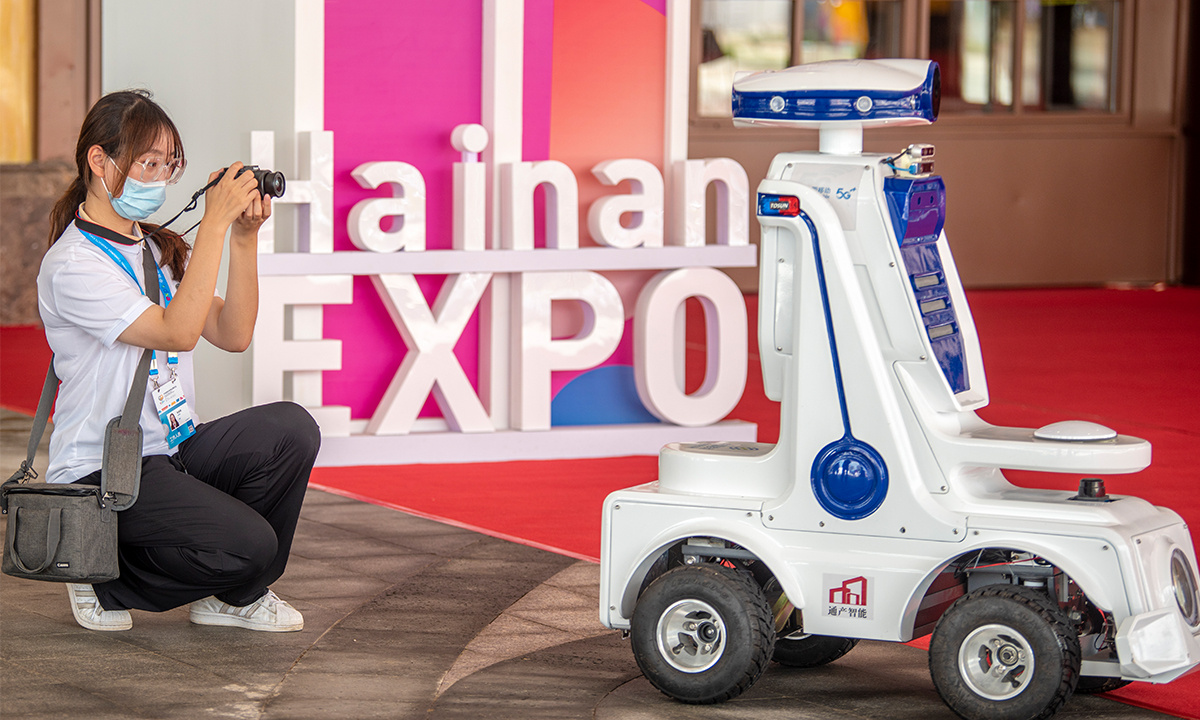 A participant at the first China International Consumer Products Expo (CICPE) takes a picture of a patrol robot at the expo center on Thursday. The CICPE is scheduled in Haikou, capital of South China's Hainan Province from May 7 to 10. (Photo: IC)

More than 80 percent of exhibitors at the first China International Consumer Products Expo (CICPE) said that they intend to sign up for the next trade fair, according to a statement sent from the CICPE on Monday, showing strong global confidence in China's consumption potential.

A total of 1,505 companies and 2,628 brands from 70 countries and regions joined the first CICPE, held from Friday to Monday. Since its opening, more than 80 percent of the companies have shown an intention to sign up for the next one, including L'Oreal, Shiseido, Tepesch, De Beers, KPMG, and Ernst & Young, according to the statement sent to the Global Times

A total of 42 companies, both foreign and domestic, have already signed up for the next exhibition, such as Tapestry, Etro and KOTRA. The exhibition spots for the next Expo will fall short of demand, the organizers said.

Covering 80,000 square meters, the trade fair, held annually in Haikou, South China's Hainan Province, is the largest consumer goods exhibition in the Asia-Pacific region, according to the organizers.

The expo is giving international businesses access to China's massive and fast-growing consumer market during a time of global crisis amid the COVID-19 pandemic. Between Friday and Sunday, the expo's pavilions received around 20,000 visitors, generating 1.5355 billion yuan ($239.42 million) of sales.

Tian Yun, vice director of the Beijing Economic Operation Association, told the Global Times that the expo will serve as an important platform for companies seeking opportunities. It will also help lift the global economy out of the fallout of the pandemic by plugging it in to the Chinese market.

"As the first major economy to recover from the pandemic, China's consumer market is now the most attractive for world businesses," Tian said. "As many of the world's economies are still mired in the pandemic, the Hainan Expo will be an exhibition that contributes to global economic growth."