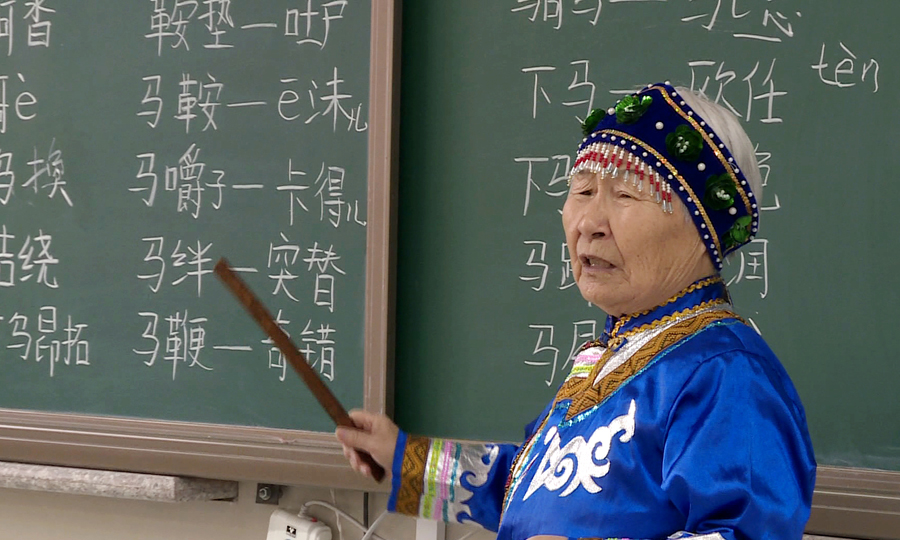 Every Saturday and Sunday morning for the past three months, Wu Xiaodong has waited for her students at the ethnic primary school in Xunke county, Heihe, in northeastern China's Heilongjiang province.

The retired kindergarten principal, whose name in the Oroqen language is Wucharkan Xiaodong, has been teaching the ethnic group's language to members of the public for free since late October. About 20 people, ranging in age from 3 to 60, attend each two-hour class.

"Despite efforts by both government and some individuals to protect the language, it is in danger of disappearing due to modernization," the 79-year-old said. "I only hope what I do can slow down the process.

"There are no limitations on the students who are interested in learning the ethnic language. My students include teachers, civil servants and housewives."

The sixth national population census of 2010 found there were 8,659 Oroqen people in China, mainly living in Heilongjiang and the Inner Mongolia autonomous region. About 3,900－45 percent of the total－were in Heilongjiang.

Unlike some other minority languages, the Oroqen language is only spoken and it has no written form.

That means Wu has to convert each word into pinyin or Chinese characters with similar pronunciation when writing on the blackboard in class.

It is a creative solution to the problem, but not an easy one to master.

"There are about 1,300 Oroqen people in Xunke, but I know very few of them can speak the Oroqen language," Wu said. "Most people younger than 60 do not speak the language anymore.

"Even though I can speak it fluently, I can't remember all the words due to my old age and lack of a language environment. To record some unfamiliar words, I have visited almost all the Oroqen seniors in the county."

She has been working to preserve the language since 2016, when she began giving irregular Oroqen lessons to pupils at the ethnic primary school.

"From that year, Heihe city began to organize an annual, province-level Oroqen language contest that aims to arouse the younger generation's interest in learning the language," Wu said. "Sometimes, before the contests or Oroqen festivals and performances, I would be invited to give the pupils some targeted lessons."

Similar international competitions are held in the neighboring Russian city of Blagoveshchensk.