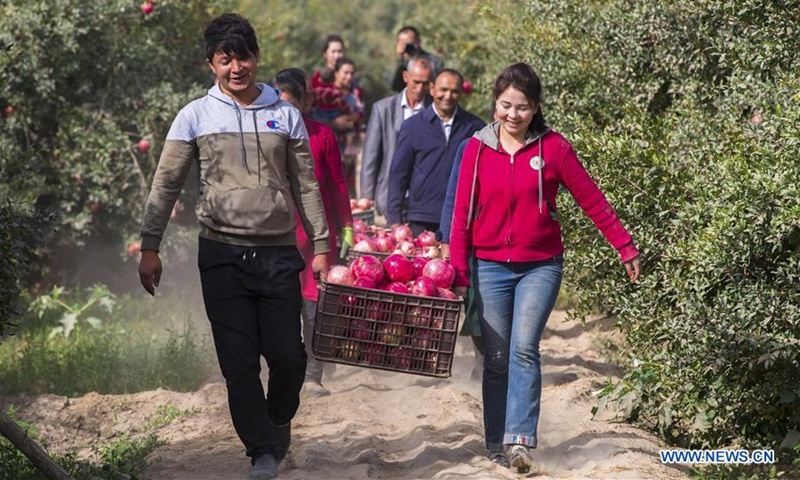 An investigation report shows that China has been offering employment assistance and legal protection to outbound migrant workers of all ethnic groups from the Xinjiang Uygur Autonomous Region so as to erase poverty in the area, instead of so-called coerced labor stigmatized by the US and its allies.

The report, released on Monday by the Human Rights Institute of Southwest University of Political Science & Law in Southwest China's Sichuan Province, pointed out that Xinjiang has the problem of surplus agricultural and rural labor and a shortage of local jobs due to the restrictions of natural conditions and the unbalanced industrial structure.

Xinjiang, located in the heartland of the Eurasian continent, is confronted with the problems of drought and desertification, as well as frequent natural disasters such as sandstorms, earthquakes and hail, read the report, saying that Xinjiang people are largely engaged in agriculture and animal husbandry, and the harsh natural conditions seriously restrict their incomes.

The proportion of the added value of the agricultural industry keeps decreasing, and it is increasingly difficult for farmers and herdsmen to escape poverty through agriculture. Experts believe that the surplus labor force has a strong practical need to move into the secondary and tertiary industries.

A majority of the 136 interviewees reached by the researchers used to work in agriculture and livestock farming, but shifted to migrant work to make more money. All of them said they were not forced to work, but had the intention of improving their economic situation and quality of life.

Data from the report showed that the increase of the disposable income of urban residents in Xinjiang came mainly from the secondary and tertiary industries.

"The positive mindset of migrant workers from Xinjiang that we saw in our field research is the strongest counterattack on the malicious slander by Western politicians," Zhang Yonghe, a professor who participated in the investigation, told the Global Times on Monday.

"Accusing China of 'forcing' Xinjiang people to work in other regions shows that the US has completely forgotten its history of westward movement," Zhang noted, pointing out that labor migration is driven by profit.

"Historically, when there is a massive migration in labor, it is a time of national development."

According to the report, 84 percent of Xinjiang migrant workers earn 3,501-5,000 yuan a month, up from 1,500 yuan a month when they were in Xinjiang doing farming and livestock work, said the report.

China has also formulated and implemented supplemental laws and policies to protect the rights and interests of workers, and strictly forbids "forcing others to work."

The changes in Xinjiang are consistent with global experience in poverty reduction, said the report, adding that the protection of the rights of impoverished women in Xinjiang has also been improved over time.

The report came after the US House of Representatives passed the Uygur Forced Labor Prevention Act on September 22, as some US politicians falsely believe that there is a large-scale systematic phenomenon of "forced labor" in the "education and training centers" in Xinjiang, and even in enterprises all over the country.

US politicians will never drop their accusations on the Xinjiang issue for political purposes, Zhang noted.

"As for China, we should keep doing what is best for the Xinjiang people and national unity."