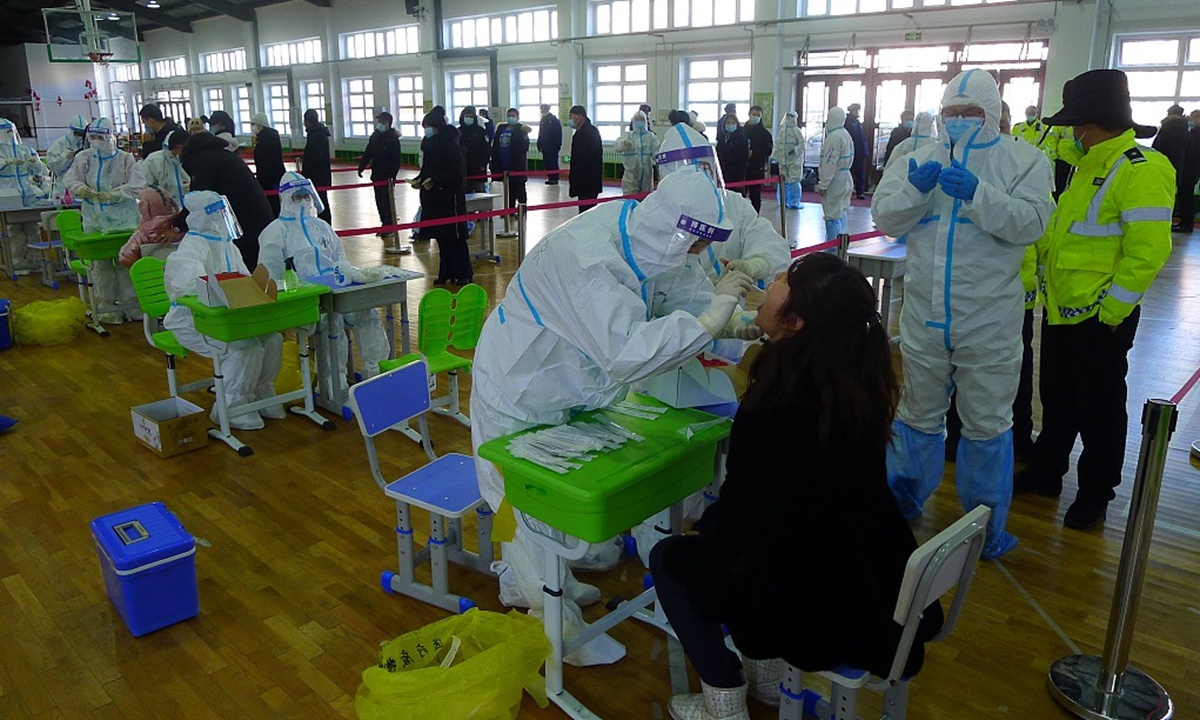 Medics give COVID-19 tests to residents at a test site in Heihe, Heilongjiang Province on December 30, 2020. (Photo: VCG)

The new COVID-19 outbreak in the locked-down Wangkui county, Northeast China's Heilongjiang Province, continued to spread as two neighboring cities on Tuesday detected eight new asymptomatic cases that are related to the outbreak.

The city of Qiqihar reported seven new cases, including three patients who have been to Wangkui county. Yichun also found one positive case after testing all recent returnees from the county.

As of Tuesday, the outbreak in Wangkui has spread to three places.

In addition to Qiqihar and Yichun, Changchun in Northeast China's Jilin Province neighboring Heilongjiang, also detected seven relevant cases. Of them, four patients were diagnosed as asymptomatic coronavirus carriers after traveling to Wangkui. Three of their close contacts were newly found to have been infected on Tuesday.

The worsening epidemic situation has prompted raised-level prevention and control measures in the affected area.

After Wangkui entered lockdown, the city of Suihua, where the county is located, announced to put all transportation and residential communities into closed-management mode on Tuesday; Qiqihar has activated a city-wide emergency response mechanism for COVID-19; Yichun has also closed all entertainment venues and private clinics and strengthened control on transportation in the city.

In some less-affected cities, such as Heihe, authorities have imposed entry restrictions for people coming from Wangkui in order to guard off the potential imported infection from the county.

A staffer from Wangkui county government, who requested anonymity, told the Global Times that the government and other relevant institutions in the county have been on their highest alert to track down and find all potential cases before the outbreak situation deteriorates.

"The biggest challenge now is that almost all the cases are asymptomatic, making it urgent to spot all the silent virus carriers through epidemiological investigation and mass testing for COVID-19," he said.

Wangkui rolled out county-wide testing on Monday, expecting to be finished within two to three days, according to a local government official at a press conference on Monday.

Wangkui's neighboring counties have also seen an increase of nervousness amid the outbreak. The Global Times learned that the prices of some vegetables, eggs and fruits in local grocery stores have gone up as people rush to markets to buy food for future storage.

A resident from Sifangtai township said that local authorities have also been going door to door to find all potential COVID-19 patients.