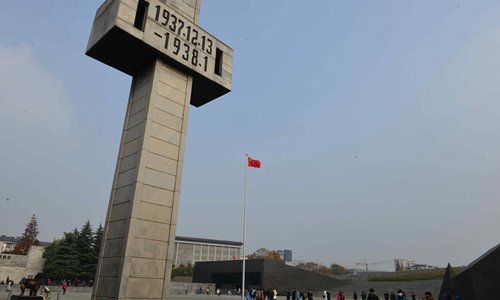 A man who allegedly cursed and insulted victims of the Nanjing Massacre made a public confession on social media on Tuesday, saying that his "stupid views" had pushed him to oppose his country.

The 35-year-old man, surnamed Meng, confessed after completing five days of detention in Shanghai for posting insulting expressions to victims of Japan's brutal occupation of Nanjing in 1937.

In his abusive remarks made on a WeChat group with 400 members on February 22, he said it was not enough to just kill 300,000 people, and he continued posting insulting expressions when other members criticized him, news site thepaper.cn reported.

Days after he was released, Meng, who did not repent for his behavior, recorded a video in front of the memorial wall of the Memorial Hall for the Victims of the Nanjing Massacre by Japanese Invaders, in which he insulted netizens who had criticized him for his behavior. The memorial hall later slammed Meng's actions on its Weibo account, calling him "impenitent, arrogant and disgraceful."

Meng is not the first man to have insulted victims of the Nanjing Massacre. Earlier, two men who wore WWII Japanese military uniforms while posing for pictures in front of a war ruins site were detained for 15 days in February.

Such cases have sparked a public outcry online and drawn wide public attention, including from deputies to the 13th National People's Congress (NPC) and members of the 13th National Committee of the Chinese People's Political Consultative Conference (CPPCC), who proposed introducing legislation to severely punish those who harm the nation's feelings and spirit.

More than 300,000 Chinese civilians and unarmed soldiers were killed and 20,000 women raped in the Nanjing Massacre, which lasted for more than 40 days following Japanese troops' capture of Nanjing, the then Chinese capital, on December 13, 1937.

"The happy life we have today was bought by the lives and blood of the martyrs, and we should be thankful," a Weibo user named "God's eagle," who has exposed several online cases involving insults against war victims, told the Global Times earlier.

The case of the two men dressed as Japanese soldiers and posing for photos in front of a Nanjing war ruins site was first exposed by "God's eagle" on his Weibo account.

The history enthusiast said on his Weibo that a member of his family had been in the eight-year War of Resistance against Japanese Aggression, and as a result he hated the Japanese soldiers' brutality and admired the bravery of the martyrs.

"Our goal is not only to punish such behavior, but to raise public awareness of such cases and urge the country to introduce legislation," he said.

The cases were also slammed by survivors of the war. Wang Yilong, 95, who injured his head in the war, was upset after learning about the two men who dressed in Japanese war uniforms for pictures.

They are adults and they should know that what they did is disgraceful, Wang told the Nanjing-based newspaper Modern Express.

Wang suggested that families and schools boost education to make young people more aware of history, and believed that 15 days in detention was too light a punishment to prevent such cases from happening again.

Another survivor, 83-year-old Ma Tingbao, said that he was startled by the wooden guns the two men carried when posing for pictures, and said that the two should be sentenced.

Wu Xianbin, the curator of the privately-invested exhibition hall of the Nanjing Folk Anti-Japanese War Museum, said that he planned to launch public interest litigation to warn people suspected of insulting war victims, according to Modern Express.

Xiong Sidong, president of Suzhou University and a deputy of the NPC, said that man like Meng have challenged the bottom line of the nation's feelings and shared values of mankind.

He said that an administrative detention of several days is far from enough for punishing these people, and the country should impose strict laws so that they pay an appropriate price, according to Modern Express.

Feng Yuanzheng, an actor and CPPCC member, said that such cases showed that China should teach young people to be patriotic from their childhood, and teach them about the country's culture and history.

Wang Fang, director of the Suzhou Opera Protection Center and an NPC deputy, agreed with Feng. She suggested that young people visit museums and memorial halls in order to remember the history of the Nanjing Massacre.