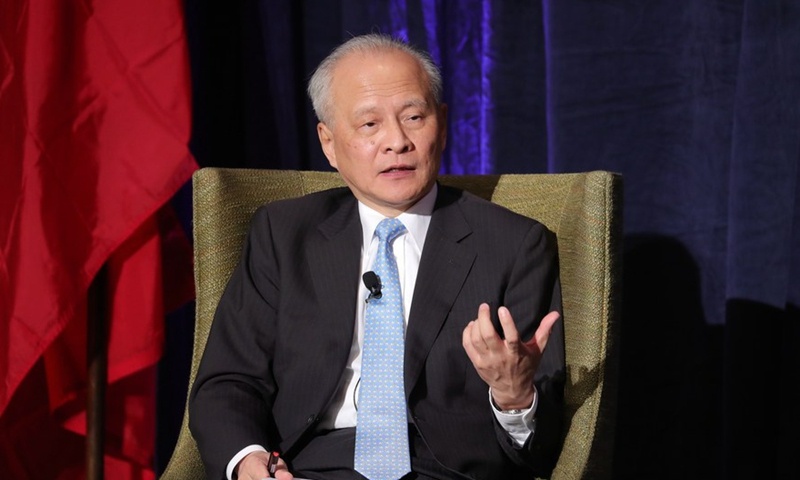 Chinese Ambassador to the US Cui Tiankai on Monday issued a farewell letter as he prepared to wrap up more than eight years in the post since April 2013, his longest term overseas.

China and US have made great achievements in diplomatic relations in the past 42 years, and the interests of the two countries are closely intertwined. Overseas Chinese in the US have been using their advantage in understanding both China and the West to act as nongovernmental messengers of friendly exchanges between the two countries, Cui wrote.

China-US relations are at a crossroads, and Washington's China policy is restructuring and facing choices between dialogue and cooperation on the one hand, and confrontation and conflict on the other. Overseas Chinese in the US shoulder a great responsibility, and Cui expressed his hope that they can continue to promote and contribute to the healthy development of relations, which is conducive to safeguarding their lives and development rights in the US, to the interests of the two peoples, and to world peace, stability and prosperity.

In the letter, Cui thanked overseas Chinese in the US who held a massive welcome banquet for him when he took office eight years ago and shared their observations of US society and contributed ideas for developing China-US relations.

They also extended a helping hand whenever their home country was in difficulty, made unremitting efforts to promote bilateral cooperation and mutual understanding, and have spoken firmly for national unity and dignity, Cui wrote.

The 100th anniversary of the founding of the Communist Party of China is approaching. Looking back, overseas Chinese have never been absent in China's revolutionary, construction and reform periods, and they have contributed a lot to the independence, liberation and development of China, Cui wrote.

The ambassador encouraged overseas Chinese to grasp the opportunity of China's building of a modern socialist country in an all-round way, which offered a broad outlook for overseas Chinese and also needed their wisdom.

"I hope overseas Chinese in the US can be united with all Chinese and strive for a better future for the nation," Cui wrote.

Cui's term overlapped with the sharp deteriorating of China-US relations. Observers noted the ambassador to the US plays a very important role and the job is extremely tough, especially when the US is now treating China as its top strategic competitor, and China's image in the US has been poisoned by anti-China sentiment, most notably since the Trump administration.

Cui, via open remarks and communication events with Chinese and Americans in the US, had left people the impression of patriotic, professional, hardworking and wise.

China has not announced the successor of Cui.