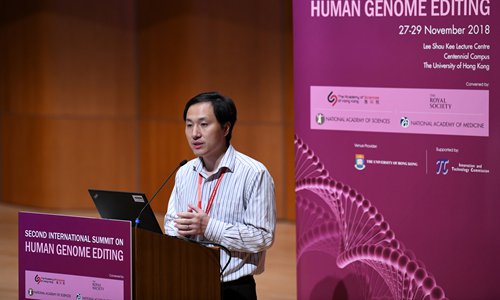 Gene-edited babies are a step backwards for the scientific community, which has failed at self-regulation, international experts said following He Jinakui's presentation Wednesday in Hong Kong of his experiment on embryos that resulted in the birth of twins, who He claimed are resistant to HIV.   He, the lead scientist in the experiment, told the Second International Summit on Human Genome Editing that he has conducted the experiment on eight married couples and all of the fathers are HIV positive. Questioned by experts at the event, He said there is "another potential pregnancy." He insisted his gene-editing experiment was intended to help people.He said he did not conduct his experiment in secrecy. In addition to consulting with international scientists two years ago, he explained his experiment at international conferences and received feedback.He said he provided the funding for his team and equipment, but some of the sequencing costs were covered by his university, the Southern University of Science and Technology in Shenzhen. The medical expenses of the volunteer couples, who were not paid to participate, were also financed by He. One of the eight couples dropped out, said He.He denied any of the companies in which he is a shareholder or owns were involved in the experiment. He is a shareholder or owner of eight companies according to the corporate data site tianyancha.com. He refused to identify the couples involved as it is illegal to disclose the identity of people who are HIV positive, saying he will make the related data available only to experts.More than 100 journalists from around the world rushed to the Lee Shau Kee Lecture Centre at Hong Kong University for He's speech. Hundreds of people attended He's presentation, and more than 500 people are registered for the event.He presented slides showing data collected from the experiment including blood tests from the infants' umbilical cord. He told the audience he will continue to assess the HIV infection potential of the twins. He said 30 of the eggs his team collected from the women were developed into embryos using the fathers' sperm and 70 percent of them were edited using CRISPR technology. He left the venue after the panel session and did not accept any media interviews.Doubting reactionAmid rising doubts and criticism of He's experiment, China's National Health Commission and the Ministry of Science and Technology said in a Wednesday statement that scientific research and medical activities must follow the country's law and ethical principles.China will resolutely punish actions that go against laws and regulations, said the statement. David Baltimore, chairman of the organizing committee of the Hong Kong event, said after He's speech that the experiment was irresponsible. Baltimore thought the experiment is a failure of the scientific community's self-regulation. "He Jiankui claimed he wanted to benefit the family, which is a sincere perspective. But I don't know in the long run whether this will benefit them. The most interesting question is whether the twins will be treated differently with other children as they grow up," said Dana Carroll from the University of Utah.  "Gene editing is very promising in the future, but I don't think we can be confident enough now of the efficiency, and I hope one of the outcomes of the controversy should be that other people slow down and don't go ahead with the reproductive editing at this stage," Carroll said. Professor Robin Lovell-Badge from the London Francis Crick Institute told the Global Times that he believed what He did was wrong and he should publish his work and data from the experiment.He's experiment was not a breakthrough but rather a step backwards, said Lovell-Badge. Sang Xinting, dean of the liver department of Peking Union Medical College Hospital, told the Global Times on Wednesday that a major risk of the CRISPR technology is that the so-called "gene scalpel" will continue to edit other genes not just CCR5 which is connected to immunity against HIV.   "It may not stop. Five years later we will not know how many of the twins' genes have been changed. It is out of control," Sang said. National supervisionHuang Jiefu, a former Chinese vice-minister of health, called for the establishment of a national ethics review committee to set standards and supervise bioscience experiments in the country. Chinese technology has developed rapidly in recent years while the development of related laws has not kept up, Huang told the Global Times on Wednesday in Beijing.The current regulation on ethical experimentation to guide experiments related to humans, embryos and stem cells was enacted in 2003. In 2016, the top health authority released a regulation requiring all medical institutes in the country establish ethics review committees to review and supervise human experiments.Huang said it is still not clear how violators of the regulations should be punished and members of the ethics committee should be both professional and have a deep understanding of rules governing ethics. Huang said He's experiment has impacted the international reputation of Chinese bioscience and needs to be properly dealt with.