CHINA Over 1,000 people to compete for one position in national civil service exam

Over 1,000 people to compete for one position in national civil service exam 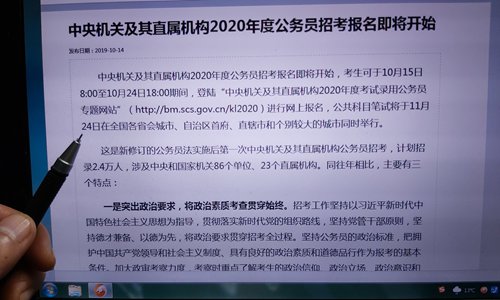 Approximately 600,000 people passed the qualification check of the national civil service examination as of Monday with more than 1,000 people set to compete for one position, according to the Chinese State Administration of Civil Service, Chinese news website thepaper.cn reported.

The exam registration will close on Thursday.

According to the report, the competition ratio of some positions surpassed 1000:1, in which 1,109 people have passed the qualification check to compete for a position in Chinese National Archives Administration, which plans to recruit one person.

Similar situations are happening with the Second History Archives and the Chinese Administration for Market Regulation.

In contrast to the fierce competition for these openings, some positions haven't received any application.

According to the report, most of these positions are in remote areas or with high registration requirements compared with other positions.

Li Manqing, president of Huatu.com, an agency providing civil service exam-related services in China, said that although some less popular positions have higher requirements or fall short of expectation, they are not bad options in terms of competition ratio and career development.

"Rooted in the grassroots level and with a positive attitude, it is possible to make something significant," said Li.