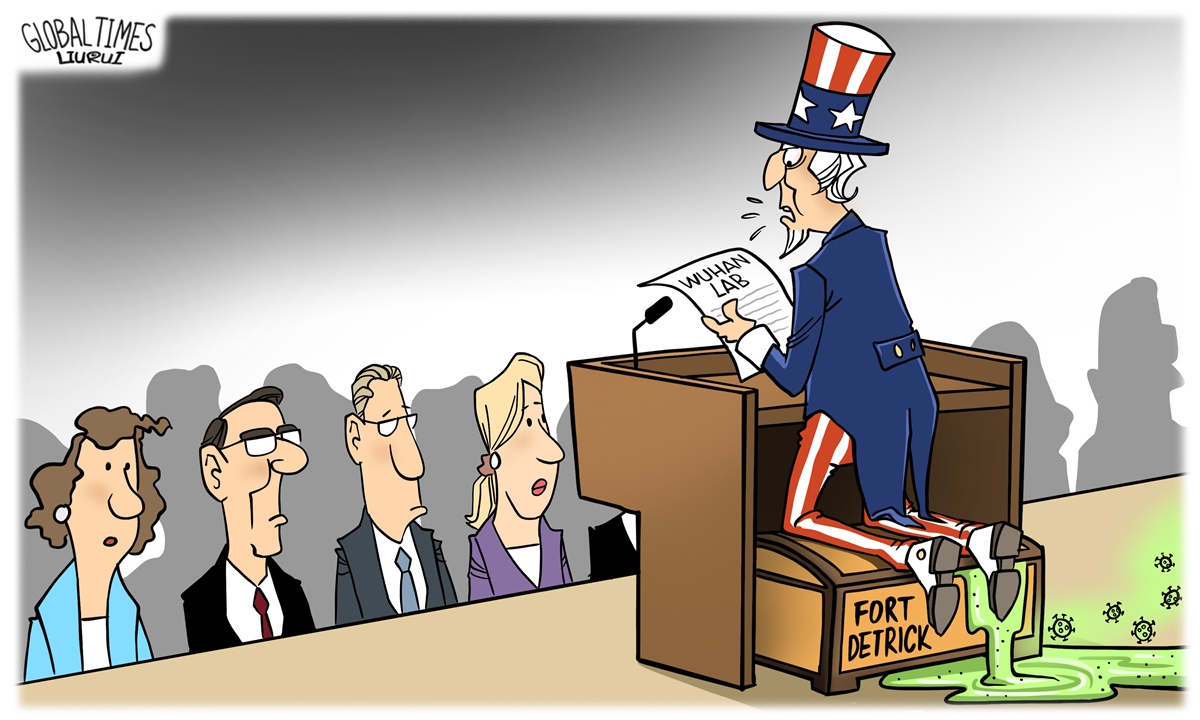 Over a million Chinese netizens have signed an open letter as of press time on Monday, demanding the World Health Organization (WHO) investigate Fort Detrick on COVID-19 origins, and the number is still increasing rapidly.

The letter was issued amid the WHO proposing follow-up studies into the origins of COVID-19. The WHO on Friday proposed a second phase of studies into the origins of the coronavirus in China, including "audits of laboratories and markets in Wuhan," calling for "transparency" from authorities. The Chinese Foreign Ministry on Monday said the latest proposal was not consistent with the position of China and many countries, and urged the WHO to work with the international community to resist the adverse trend of politicizing the COVID-19 origins issue.

A group of Chinese netizens drafted an open letter to ask the WHO to investigate the US Army Medical Research Institute of Infectious Diseases (USAMRIID) at Fort Detrick, Maryland, And entrusted the Global Times with posting the letter on its WeChat and Weibo platforms on Saturday to solicit public response.

Prior to this, the same group published an open letter in June calling for the WHO to investigate Fort Detrick.

The Global Times also launched an online poll on Saturday, and over 90 percent of the 18,000 respondents agreed that the WHO should investigate the Fort Detrick biological lab, as of press time Monday.

At Monday's press conference, Chinese Foreign Ministry spokesperson Zhao Lijian said the US should be transparent and face up to the calls of the international community, including the Chinese, and give a satisfactory response to the open letter and online poll.

The public and the media are trying to get answers to questions that the international community has been asking for a while. However, some people in the US have been keeping the public in the dark, Zhao said.

"Please answer the following questions: First, what's the connection between the Fort Detrick lab and the unexplained respiratory diseases like those suspected with vaping? Second, why hasn't the US invited the WHO to conduct a thorough investigation at Fort Detrick? Third, why can't international experts visit the US for tracing virus origins since they have visited China?" Zhao asked.

On WHO's proposal for a follow-up study into the origins, Zhao said that it was not consistent with the position of China and many other countries. China hopes that the WHO will have full communication with member states, listen to and adopt opinions of all parties and ensure that the drafting process of the phase-II study is open and transparent.

China is concerned about the politicization of the coronavirus origins tracing by some countries. We hope that the WHO,in the spirit of scientific professionalism and objectivity, will work with the international community to resist the adverse trend of politicizing the issue, Zhao said.

Yang Zhanqiu, a deputy director of the pathogen biology department at Wuhan University, told the Global Times that almost all prevailing coronavirus variants have been discovered in the US. By comparison, the virus strain found in China has no bearing with many variants. Therefore, it is appropriate to carry out a virus origins probe in the US, said Yang.

The virologist also called on the US to hand over blood samples of those COVID-19 patients, and disclose more information about the country's epidemiologic survey, to give a clearer picture of the relation between US cases and those of other countries. He said that US labs keep blood samples dating back to the 1980s.

In June, a study of more than 24,000 samples taken for a National Institutes of Health (NIH) research program in the US between January 2 and March 18, 2020, found that seven people in five states - Illinois, Massachusetts, Mississippi, Pennsylvania and Wisconsin - may have been infected with COVID-19 well before the country's first confirmed cases reported in January 21, 2020.

The WHO-China joint study report issued on March 30, 2021, reached a clear conclusion and offered suggestions for the next phase of global study into the origins, which concluded that the Wuhan "lab leak" hypothesis is extremely unlikely, and that we should look for possible early cases of the outbreak more widely around the world and further understand the role of cold chains and frozen food.

Zhao said that the conclusions and recommendations of this report should be respected and upheld, and be reflected in the next phase of studies into the origins of COVID-19.