CHINA Over 17 kg of drugs seized in Chinese border province

Over 17 kg of drugs seized in Chinese border province

After receiving a tip-off on drug trafficking, police in Kunming, the capital city of Yunnan, found 12.83 kg of heroin and 4.52 kg of methamphetamine hidden in the trunk of an off-road vehicle driven by the suspects earlier this month.

The three suspects have been put under criminal detention. Further investigation is underway. 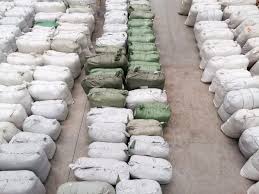