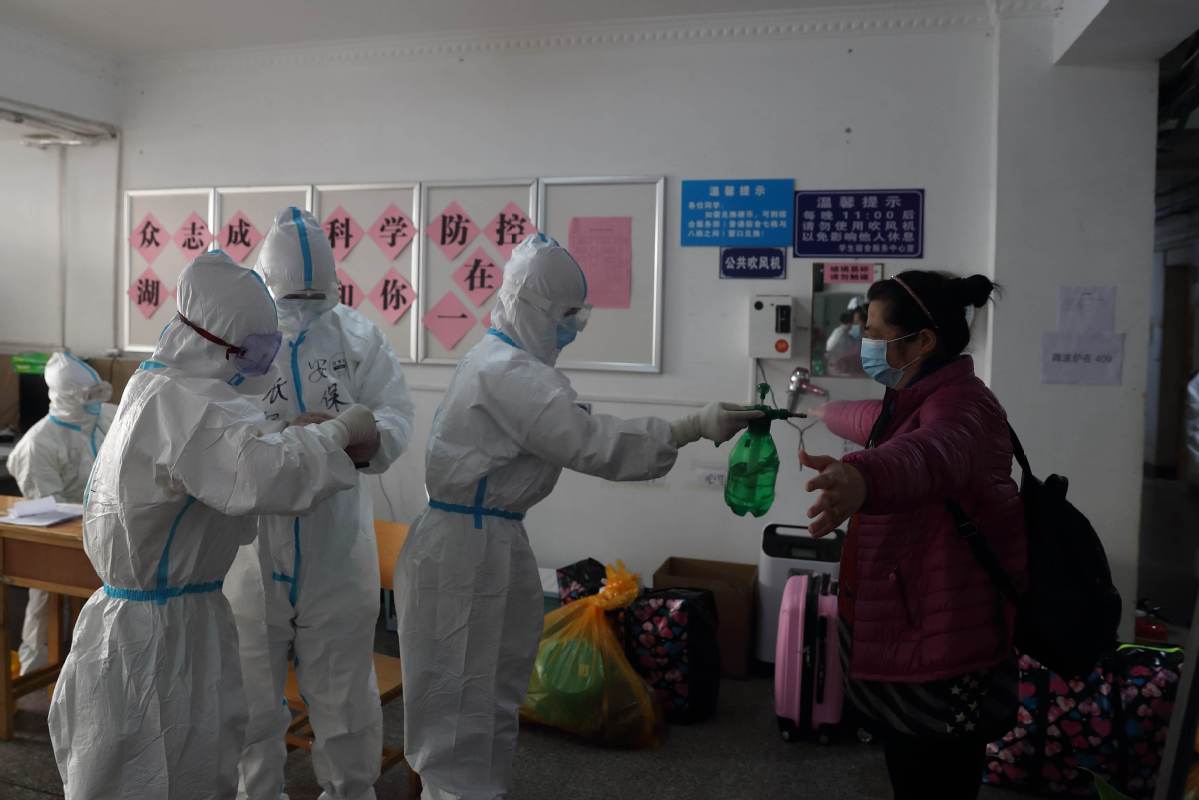 Medical workers disinfect a cured patient of the novel coronavirus before she is discharged from a rehabilitation center. (Photo: China Daily)

After staying in a quarantine site in a university in Wuhan for two weeks, 172 cured patients of the novel coronavirus were discharged from medical observation over the weekend.

The patients were the first group to have been released from the site, one of the biggest in Wuhan, in Hubei University since it started to receive patients on Feb 29, Chen Jing, deputy commander of the site, said.

"All of them tested negative for the virus twice and were evaluated by doctors before being released," she said. "They need to continue to isolate themselves at home for two weeks after being released."

The quarantine site, transformed from students' dorm buildings of the university, has more than 1,300 beds, and has received nearly 1,100 cured patients, Chen said.

All cured COVID-19 patients must undergo two weeks' medical observation at designated isolation sites before they can go home, according to regulations released by Wuhan government in late February aimed at ensuring the health of these patients and their family members.

Although all cured patients must pass virus test before being released from hospital, in some cases the test result may not be accurate enough due to causes such as improper sampling and inconsistent quality of testing kits, which may result patients still carrying the virus testing negative.

In the quarantine site in Hubei University, medical workers, security personnel, cleaners, firefighters and volunteers work together to ensure safety and health of the patients, Chen said.

Liu Xiaocui, one of the patients released from the quarantine site on Saturday, said she was transferred to the site on Feb 29 after being released from a makeshift hospital.

During the two weeks' stay, the medical staff in the site measured her body temperature twice a day and prescribed her some traditional Chinese medicine for her, she said.

"I am really glad I can go home finally," she said carrying luggage at the university campus after walking out of the dorm. "I had a video chat with my husband and daughter last night, and they are waiting for me at home."

Liu said workers from Zhonghualu community, in Wuchang district, where she lives, were waiting outside the university and will send her home.

Feng Bangli, another patient released from medical observation on Saturday, said he was relieved after a long experience of being treated.

Feng, an information technology worker, said he had fever on Jan 31 and suspected he got infected via his father-in-law.

After staying at home for a few days he was transferred to a designated hotel for quarantine, where he tested positive for the virus in mid-February, and then he was sent to a temporarily built hospital for treatment, he said.

Recalling the past two weeks in the quarantine site, Feng said he was very satisfied by the help provided by the staff, including medical workers, who provided them good meals, medical care and entertainment.