Over 4,000 citizens in northwest's China Ningxia Hui Autonomous Region ran a 10-kilometer race in the biting cold to welcome the new year on the first day of 2019.

"Running into the New Year" is a traditional sports event held in Yinchuan, capital city of Ningxia, to farewell the past 2018 and celebrate the coming of new year with a history of about half a century. The event is supported by regional sports bureau, attracting a large number of citizens taking part in every year. 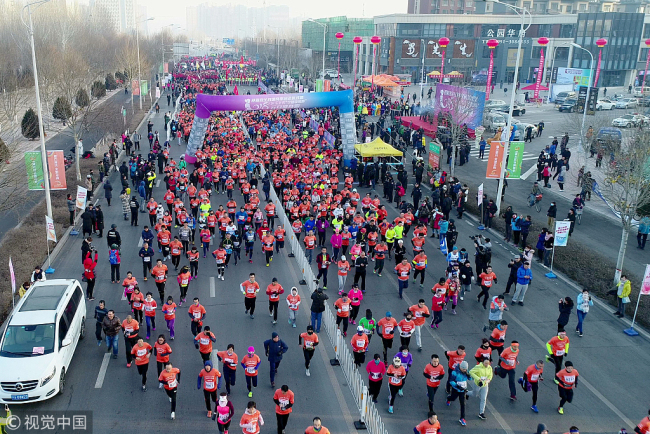 Tian Fengxia, 17, who participated "2019 Running into the New Year" for the first time, finished second in the junior women's group. It took her 44 minutes and 34 seconds to finish the distance.

"I always get prizes in the running race, but today is different, because it means a good start of my 2019," said Tian, adding that she is going to take national college exam this June and she hopes to be admitted into a well-known university.

"It's rather cold today, but I may face more challenges than this in the future, so I'm quite happy I made it," Tian said.

In recent years, more and more Chinese citizens have become aware of the importance of taking sports, especially when China's government promoted the "nationwide fitness program". Running is one of the most popular sports in China.

It's estimated that over the past five years, more than 30,000 citizens altogether have participated in the event, and the number has been seeing a year-on-year increase.

"This year, we have participants of more than 70 years old as well as seven years old," said Shi Qihong, who is one of the organizers of the "2019 Running into the New Year" event.

Jiang Laowu, 67, has come to run the race from Wuzhong City, which is about 60 kilometers away and finished the race in 53 minutes.

"I'm quite satisfied with the result, and it's the same as last year. I grow older but my speed stays stable," said him.

Jiang keeps running for more than 30 years, and he would run at least 10km every day to keep fit. Last year, he participated in a local "running club" of more than 300 members to better exercise in all kinds of running races within Ningxia.

"Today marks a new year, and I hope to keep running, break through my best results and stay healthy in the coming 2019," added he.