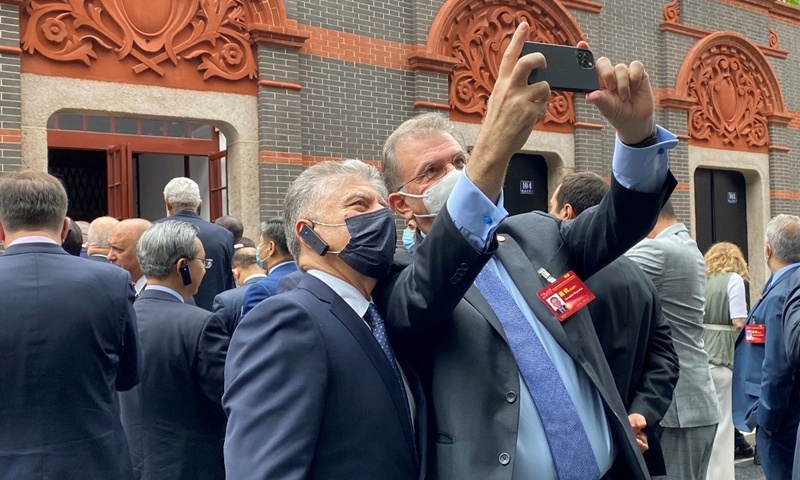 Diplomats take a selfie in front of the site of the First National Congress of the CPC on Wednesday in Shanghai. (Photo: Global Times)

Over 40 foreign diplomats explored and experienced the memorial site of the First National Congress of the Communist Party of China (CPC) in Shanghai on Wednesday, where they saw over 600 valuable relics in the 3,700-square-meter exhibition hall to better understand the history of the CPC.

At the site of the first National Congress of the Party, the diplomats watched a group of new Party members, with an average age of 32, take their oaths to express their willingness to become members of the Party.

Upon finishing their visit at the site, Baudelaire Ndong Ella, Ambassador of Gabon to China said the starting location is important for the CPC, and China is always improving because the CPC members "never forget why they met here. They never forget why they created the CPC."

"Since the Party was created, you can see the evolution of China," Ambassador Ndong Ella said, noting that their country is inspired by the CPC, because the "CPC still focuses on Chinese people, the well-being of Chinese people, to create a good condition of life."

On July 23, 1921, 13 early members of the CPC gathered in the two-story building at 76 Xingye Road in Shanghai, triggering overwhelming changes in China. The congress then moved to a boat on Nanhu Lake in Jiaxing, East China's Zhejiang Province.

In the memorial hall, Gafar Karar Ahmed, Ambassador of Sudan to China was observing the revolution relics carefully. He told the Global Times that he understood the history and also studied some of the documents of the first national congress.

Ambassador Gafar Karar Ahmed said that the CPC has already "fulfilled its commitment to the people," adding that "now we see a strong nation, free and happy people."

Selim Belortaja, Ambassador of Albania to China also shared his excitement with the Global Times after visiting the memorial site. He told the Global Times that it was his second time visiting Shanghai and he would like to come again in the future.

The event was organized by the International Department of Central Committee of the CPC and Shanghai Municipal Committee of the CPC. It is part of the events of Shanghai's Achievements in Practicing Xi Jinping Thought on Socialism with Chinese Characteristics for a New Era: A Special Thematic Dialogue.