CHINA Over 60 percent believe China will recover to pre-COVID19 status in a year: GT survey

Over 60 percent believe China will recover to pre-COVID19 status in a year: GT survey 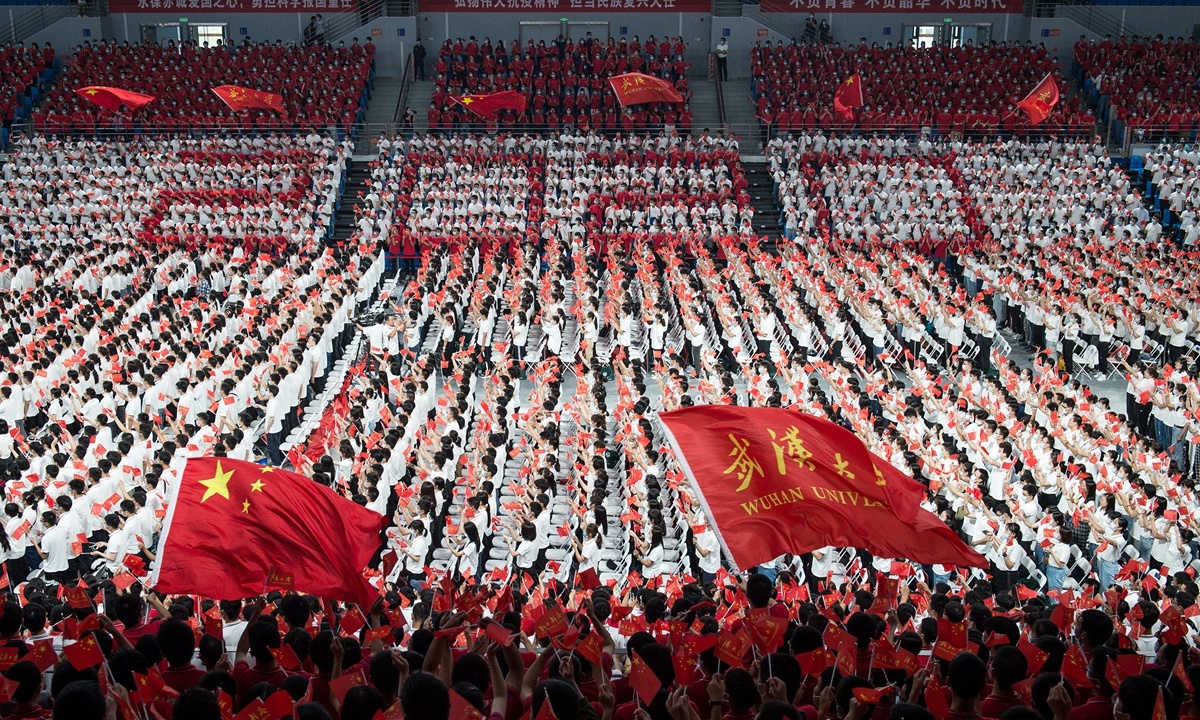 A total of 7,242 freshmen attend the opening ceremony at Wuhan University, in Central China's Hubei Province on Saturday, nine months after the city was hit hard by the novel coronavirus.(Photo: VCG)

More than 60 percent of respondents to the latest survey recently conducted by the Global Times believed that China's economy will recover to its pre-epidemic status within a year, and the country's all-out efforts in fighting the coronavirus epidemic have fully lifted public confidence and strengthened national solidarity, according to the survey results.

Meanwhile, the survey showed that China's military and economic achievements in the past five years are the two most recognized developments, which some observers considered as an indirect outcome of the US' continuous efforts to curb the rise of China.

About 63.4 percent of the survey participants believed that China's  economy will recover to its pre-epidemic status within one year, among which 21.3 percent said the economy may recover in just six months, according to the survey the Global Times conducted from September 18 to 21 by collecting in a total of 2,052 effective responses. The respondents were from 10 first- and second-tier cities such as Beijing, Shanghai, Guangzhou, capital of South China's Guangdong Province and Wuhan in Central China's Hubei Province and Kunming in Southwest China's Yunnan Province

"The prevailing optimistic view on the country's economic recovery post-COVID-19 partially originates from a comparison with foreign countries, and such strong confidence also stems from the effective containment of a possible resurgence of new cases," Cao Heping, a professor of economics at Peking University in Beijing, told the Global Times on Sunday.

The accelerating economic recovery is also in line with expectations, the economist said, noting that the epidemic has not hurt the fundamentals of the economy, with recent macroeconomic figures indicating faster recoveries in production, export and consumption.

The all-out people's fight against the COVID-19 outbreak also reinforced confidence in national strength and enhanced solidarity. The survey also showed that 62 percent of the respondents expressed more confidence in China being strong and people being united while 60.3 percent saw their confidence lifted in the country's capability to handle public emergencies.

Besides, 58.8 percent of the survey participants showed much more confidence in China's public health system and 54.7 percent of them recognized the improvement in the capability of social mobilization.

As the first country to report coronavirus cases, China took strict and effective measures in containing the viral spread with the efforts and solidarity from the whole nation. The country contained the epidemic within just a few months and sporadic outbreaks in some places have not led to a resurgence of an epidemic. However, in the US, with students back to school and businesses reopening, daily new cases are still continuing to increase while its total death toll has already surpassed 200,000.

"As long as China puts imported cases under control, after the vaccines will be put into use, the growing market demand will further drive up the economic recovery, which would exceed expectations," Cao said.

China is widely considered as the silver lining of an overall grim picture of the world's economy engulfed in a pandemic. According to the latest report released by the UN Conference on Trade and Development (UNCTAD), the country is expected to grow by 1.3 percent this year before logging an 8.1 percent expansion in 2021, while the global economy would contract 4.3 percent.

While Chinese vaccine producers are accelerating clinical trials for COVID-19 vaccine candidates and preparing for full-speed production once a product is approved, 91.4 percent of the participants expressed their willingness to administer China-developed vaccines, according to the survey. Only 2 percent chose Japanese vaccines and 1.7 percent wish to take products made in Germany.

For those who do not intend to take a vaccine dose and who still hold a wait-and-see attitude, 34.7 percent of them have concerns about the safety of the vaccines. And 18.3 percent of them believed that the epidemic has been under control in China, which means there's no need for taking a dose.

Not only has Chinese traditional medicine been helping the fight against COVID-19, it has also become the most influential factor representing China, according to the survey.

Looking back on the 13th Five-Year Plan (2016-20), 57 percent of the survey participants believed that China has made the most significant progress in military strength and economic development compared to the situation five years ago. Also, 54.5 percent recognized China's technology and innovation, 52.7 percent approved the country's medical standards and 50 percent took poverty alleviation as a highly recognized achievement.

When asked about in which sector China has become the world's powerful country, 56.6 percent of the respondents think it is the country's military power while 51 percent said it is manufacturing and industry. Meanwhile, 50.6 percent of the participants recognized China's economic strength as a domain where the country is leading ahead of others.

"The survey results reflect that in face of growing uncertainties, including US-led provocative moves in challenging China's sovereignty and core interests, China has no other choice but to continue enhancing its military power, which is defensive though," Song Zhongping, a military expert and TV commentator, told the Global Times on Sunday.

While Chinese people do not want to engage in a war, under the provocation of the US government, China now has territorial disputes with several neighboring countries and regions. From the South China Sea to China-India borders to the Taiwan Straits, the tactics of the US in suppressing China forced it to strengthen the country's military capabilities, some observers said.

Also, nearly half of the total respondents thought China is a powerful country in the technology sector, and 40.9 percent of the respondents believed the country is leading in medical services.

When it comes to the ranking of the technological levels of each country, most respondents consider the US remaining the world's No.1 power. And 25.7 percent of the participants believed that China tops the ranking. Over two-thirds of the respondents believed that China's overall technological level ranked among the world's top three, which is only behind the US and leads ahead of Japan. And 81.8 percent of the participants are seeing the US as the No.1 in the technological field.

The latest US crackdown on Chinese tech firms such as Huawei and TikTok made nearly 30 percent of the survey participants believed countries that strike those firms do so because they are afraid of the rising influence of Chinese technology, while 23.8 percent considered the crackdown as an extended move of the US' containment policy toward China.

Besides, 14.8 percent of the respondents saw such behavior as a way of "diverting public attention" from domestic problems to China-related issues.