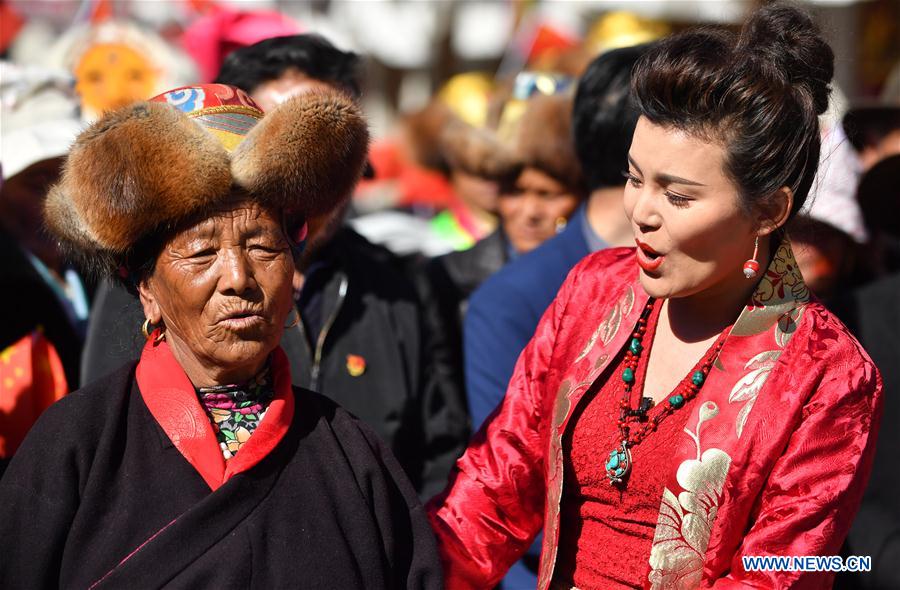 LHASA, March 23 (Xinhua) -- Sixty-two years ago, Khesum was the name of a manor in Tibet, and also the name of a living hell for 302 serfs there.

In the eyes of the serf owners, serfs are nothing but "talking tools" at their mercy. "A staff symbolizing the judicial privilege of serf owners was hung all year round at the entrance of the manor," said Losang Drolma, a 79-year-old resident in today's community of Khesum. "Serfs lived in hopelessness and despair there."

Today, the misery and serfdom that defined the Khesum of old are nothing more than a distant memory. Khesum community, previously Khesum Village, was the first village in Tibet to launch the democratic reform in 1959, when all serfs were liberated from feudal serfdom.

In the 1960s and 1970s, there was a play well-known across Tibet that always caused the audience to burst into tears. The play, based on true events that happened in the manor, tells the story of a serf family who were tortured by the serf owner.

In the play, a serf named Trinley Dorje, who was starving to death, had no choice but to steal dog food. After being discovered by the steward of the manor, he was tortured and killed in prison.

His wife went insane and disappeared into the darkness. His two sons tried to avenge their father and were eventually tortured to death by the serf owner.

"The cruelty in the manor was far more heinous than you can imagine based on the photographs and instruments of torture in the exhibition hall," said Sonam Dondrup, 78-year-old former Party chief of Khesum Village. "The sufferings of serfs were as infinite as the stars in the night sky at that time."

On June 6, 1959, under the leadership of the Communist Party of China (CPC), 302 ragged serfs exercised their right for the first time to elect the organizing committee of the first farmers' association in Tibet. Through this transformative step, they secured for themselves about 113 hectares of land, something their ancestors had dreamed of for generations.

"In the past, serf owners were on the top and trod on us. Today, the CPC has liberated us and we have finally stood up!" said Nyima Tsering, who was elected director of the association at the time.

The democratic reform in 1959 abolished feudal land ownership. Serfs and slaves, who accounted for more than 95 percent of the total population at that time, finally enjoyed true personal freedom and were able to share their own land and other means of production for the first time.

Under the leadership of the Party branch and Party members, Khesum people devoted themselves to production and construction while farming, repairing canals and even holding night schools. They finally became the masters of the land.

Since the 18th CPC National Congress in 2012, China has invested nearly 40 million yuan (about 6.14 million U.S. dollars) in Khesum, helping locals renovate drainage, lighting, and other systems while building a service center and rural library.

Residents of Khesum community chose to lease 5.57 hectares of their land to a company in 2020. This offered them an additional income stream while also affording them more time to work outside the community, further boosting their earnings.

"With the implementation of the country's rural vitalization strategy, Khesum is planning to develop a rural tourism industry integrating catering, accommodation and leisure with its convenient transportation and other advantages," said Gamtsu, the community's Party chief.

"I am so proud of the great changes of my hometown of Khesum," said Bema Dechen, who studies at Zhejiang University based in east China's Hangzhou City. "I am also applying to join the Party and striving to contribute to the future development of my hometown after graduation."