A new Global Times poll has shown that over 70 percent of respondents believe that "wolf warrior diplomacy" is the diplomatic attitude that China should take, with 78 percent of interviewees believing that China's global image has improved in recent years.
Comparison of this poll and those from the West shows that China is viewed quite differently in the eyes of Chinese people and some Westerners. Experts say that China's international image is shaped by long-run facts, rather than the recent uproar of Western media and public opinion.
Chinese Foreign Ministry spokesperson Hua Chunying recently responded to accusations from some Western media and politicians who used the term "wolf warrior" to describe China's diplomacy. Hua stressed that China has no tradition of being aggressive, but will also not flinch in the face of bullying and provocations.
"When it comes to wolf-like attacks on China from some countries on trumped-up charges, how can China just be a silent lamb?" Hua asked.
"If some people call China's diplomacy "wolf-warrior diplomacy" just because we fight back and speak the truth in the face of unscrupulous attacks, slanders and denigration, I don't see any problem in living with that "wolf-warrior" title, as long as we are fighting for China's sovereignty, security and development interests, national dignity and honor, and international fairness and justice," Hua said. 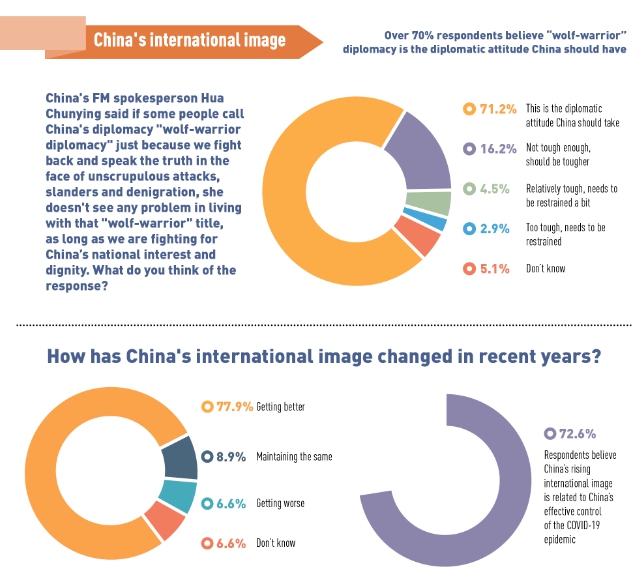 According to the poll, 71.2 percent of interviewees believe that the Foreign Ministry has responded appropriately, and over 23 percent felt that it was not tough enough. Only 2.9 percent of the interviewees believe that the response was too strong and needed to be restrained.
"What China has done has been based on better defending the interests of its own people. It is not the Western media and politicians that determine China's diplomatic gesture," Li Haidong, a professor at the Institute of International Relations of the China Foreign Affairs University, told the Global Times, noting that the "wolf warrior diplomacy" label is invented by the West that describes hawkishness.
77.9 percent of interviewees believe that China's international image has improved in recent years, and only 6.6 percent of the respondents believe that China's international image has deteriorated.
72.6 percent cited China's successful anti-pandemic efforts as one of the main reasons for this improvement.
But it seems that "wolf warrior diplomacy" label and the COVID-19 pandemic have undermined China's international image in Westerners' eyes.
A Pew Research Center survey indicated that the pandemic intensified distrust and negative views toward China from developed countries in the West. Based on a survey from 14 countries, 61 percent of respondents believe that "China had done a bad job" in dealing with the COVID-19 outbreak.
Analysts said that the Western media and politicians, which screen China's shortcomings with a magnifying glass and go as far as to smear China, provide bad guidance to Western people who do not know much about China.
"No matter how the West discredits it, it is a fact that China has done a good job in controlling the pandemic and helping other countries," said Li, noting China's moves have formed a sharp contrast to the response by the Trump administration, which should take the primary blame for the spread of the virus, as they did not fight the pandemic scientifically, rejected international cooperation, and politicized the virus.
When exchanging with the West, we need to separate the extreme and biased politicians from regular Western people who see China in a rational and objective view, said Li, noting that the West's political stigmatization of China is not in the interests of the majority of the West.
China is also communicating with the West through English social media. Diversified forms of exchange can influence the Western public without ideological prejudice and form an objective view of China, Li said.
"The West should not take it for granted that its own rules and values are globally universal, because the reality is that non-Western economies also have their own development demands and cultural backgrounds," Li said.
The Global Times poll was conducted through online questionnaires from December 11 to December 17. The poll gathered 1,945 responses from 16 cities in China, including Beijing, Shanghai, Guangzhou and Wuhan.