CHINA Over 8.31 million people call for release of Meng Wanzhou

Over 8.31 million people call for release of Meng Wanzhou 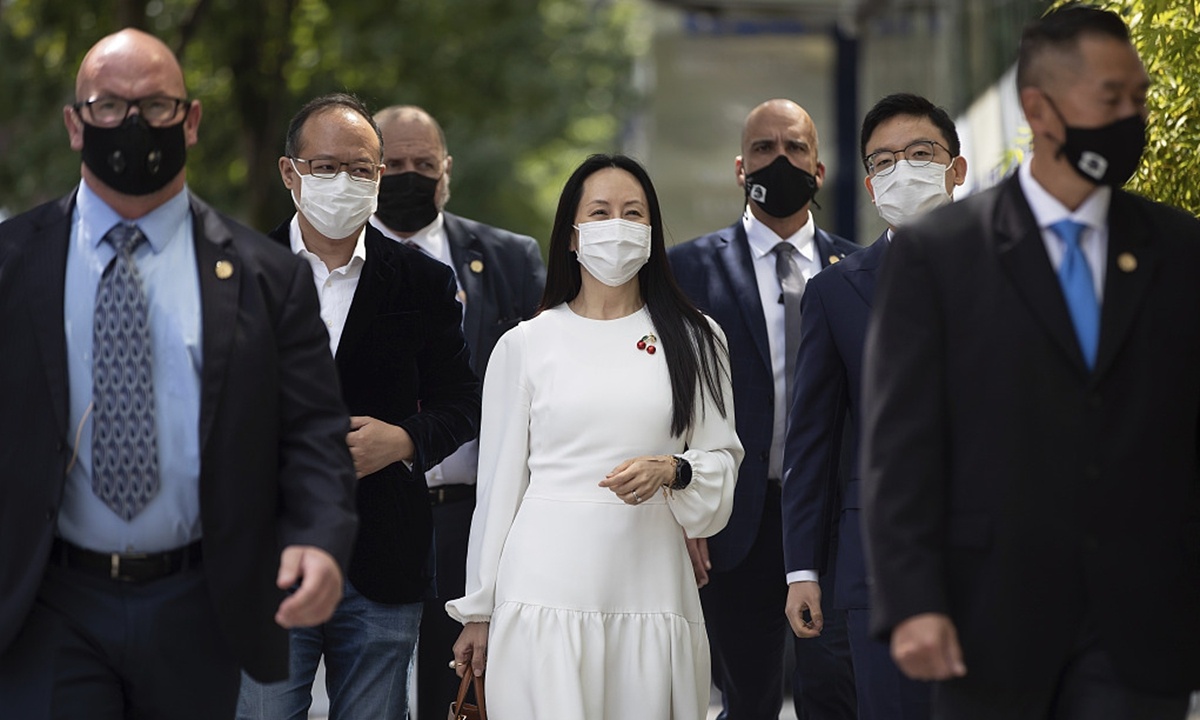 While the lawyers of Huawei's Meng Wanzhou wrapped up marathon extradition hearings on Wednesday (Canadian time), the Global Times-launched online petition in demanding the immediate and unconditional release of Meng collected nearly 8.31 million people signatures as of press time on Thursday, reflecting a collective public voice in urging the Trudeau administration to stop playing the role of the willing accomplice of the US government and setting up such a well-plotted trap for the Chinese citizen to curb China's high-tech industry.

Thirty-two months after her arrest, Meng and her defense team made the final push against extradition to the US, and the legal proceedings ended on Wednesday without a decision. The judge will convene a case management conference on October 21. During the conference, she will indicate a date when the decisions will be given, according to a court note the Global Times obtained on Thursday.

Huawei Canada said in a statement it sent to the Global Times on Thursday morning that from the start, Huawei has been confident in Meng's innocence and it has trusted the Canadian judicial system. "Accordingly, Huawei has been supporting Meng's pursuit of justice and freedom. We continue to do so today," it noted.

The high-profile case has been caught in the public attention worldwide. As August 26 marks the 1,000th day since Meng was detained in Canada, the Global Times launched an online petition at 10:15 pm on Wednesday demanding her immediate release. In less than 24 hours, about 8.31 million netizens worldwide have signed the petition, which, experts said, showed the collective voice of people calling for the Canadian government to release the illegally detained Huawei senior executive.

Also on Wednesday, the Global Times released an open letter to Canadian Ambassador to China Dominic Barton, demanding Meng's immediate and unconditional release and protesting against the ugly acts of the Canadian government, which is acting as an accomplice of the US government to persecute a Chinese citizen.

From the beginning, the previous Trump administration was blatant in suppressing Huawei Technologies by using the hand of Canada to detain Meng, knowing Canada was willing to be an accomplice, noted the letter to the Canadian envoy. "Many people in Canada and from the international community are aware of that. There is enough evidence to show that the US distorted the facts to lay out a false case against Meng. They even presented falsified evidence in court," the open letter said.

"That such a huge number of signatures were gathered in less than 24 hours showed that the Chinese public attaches high attention to the unfair treatment of Meng in Canada. They hope Canada would handle the case in a justified way, which is a commonly shared will, Li Haidong, a professor at the Institute of International Relations at China Foreign Affairs University, told the Global Times on Thursday.

"The yearlong legal wrestling is seen as an unfortunate incident caused by the Canadian side, and the public generally believes that Meng will surely come back to China one day," Li said.

At the request of the US government, the Canadian government, based on the so-called accusations of fraud imposed by the US, illegally detained on December 1, 2018 Meng, who is also the daughter of Ren Zhengfei, founder of Huawei.

She was accused of defrauding HSBC as she was said to have "lied to the bank about the Chinese company's business in Iran," and the charges have centered on a PowerPoint presentation that the CFO gave to the bank in a steakhouse in Hong Kong in 2013.

In her defense, Meng's defense team raised four branches of abuse of process: political motivation, unlawful detention, material omissions and misstatements, and violations of customary international law. Her lawyers have claimed that the US deliberately omitted two slides from the PowerPoint presentation, which showed that Meng didn't mislead the bank at all.

"During the latest proceedings, Canadian judges repeatedly raised questions and points of suspicion to fraud accusations made by the US against Meng, saying that the accusations were contradictory and unclear, while further exposing the inconsistencies of the Canadian side that has failed to justify itself," Chinese Foreign Ministry spokesperson Hua Chunying said on Thursday at a routine press briefing.

Meng's case has always been a political persecution of the US, and Canada's unreasonable detention as an accomplice is a textbook example of coercion and violation of human rights, she said, urging Canada to listen to China's voices and allow Meng to come back to her motherland.

"There can be miracles, when you believe," a recent post on Meng's WeChat moment seen by the Global Times read. The Huawei senior executive said this has to be a well-prepared battle while upholding faith.

Several Huawei employees who spoke with the Global Times on condition of anonymity also noted that they firmly believe that Meng will return home safely as all the facts and evidence proves her innocence. After a yearlong crackdown from the US government, the company will survive amid the strictest chip ban, and Meng will get through this unprecedented legal battle and difficult time, an employee said.

Meng has an elderly father and young children at home. Canada ignored the fact that she had never violated any Canadian laws, but detained her without any reason for nearly 1,000 days. "Such behavior is a textbook example of coercion and violation of human rights." Hua said.

For those politicians in Canada and in the US who claim to respect public opinion, such a huge scale of online signatures should not be ignored, Li Haidong said, noting that releasing Meng is not only the request from the Chinese government but also from the Chinese people.

More and more people have realized that Canada has been playing dirty on the detention of Meng, serving as an accomplice of the US, the Chinese expert noted. "For a big country like Canada, such misdeeds damage its dignity and independency of its diplomacy. Canada is acting like a puppet for America, and that is generally acknowledged by the Chinese public."

Chinese legal experts forecast that the final verdict might not turn out well. After Joe Biden took office as the US president, there is an obvious tendency of collusion between Canada and the US, some experts said.

Even if Canada rules in favor of Meng, it might still be turned over in the administrative ruling by the Minister of Justice, as the administrative ruling will take into consideration Canada's foreign relations and national interests, and under such circumstances, Canada is even less likely to make a decision that runs counter to its ally, Huo Zhengxin, a law professor at the China University of Political Science and Law, told the Global Times on Thursday.

However, in this prolonged struggle among the three world powers, Canada will be the biggest loser, Huo noted. If it hands Meng over to the US, it will pose a serious negative impact to its relations with China both in terms of trade and between the two peoples, shattering its long-established image as a neutral country, he said.

Canadian Prime Minister Justin Trudeau called for early elections on September 20, saying he needed a new mandate to ensure voters approved of his Liberal government's plan to recover from the COVID-19 pandemic, Reuters reported on Monday.

"Given the current political situation in Canada, Trudeau has little flexibility and room for compromise when it comes to the case of Meng, as he will definitely use it as leverage for the election," Li said, noting that Canada's Conservatives won't compromise either, and more political factors may get entangled in the case.