Overseas Chinese share their best memories of food from home 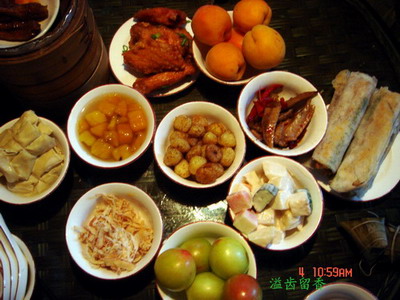 "Once when I talked to some of my friends who live abroad, they told me that the biggest problem they have is getting good Chinese food. Some even end up crying alone in their apartments because of this," Ruo Meng, the head director of the show said.

Fire brings me back "The most unforgettable dishes in my hometown are the various of cooked vegetables; cooked Chinese mugwort and celery, for example," Shao Ziyi, a young lady from Beijing who lived in London for a long time, told the Global Times while recalling the tastes of her childhood. "Steamed bass is also one of my favorite dishes. It was something I could barely find anywhere abroad," Shao said.Born in Beijing, Shao loves traveling and making friends. According to her, her best memories of Beijing were of the gas stove that her mom used to cook on.  "Using fire to cook is really awesome!" Shao told the Global Times in an excited voice. Instead of using more modern induction cookers or ovens for Chinese food, cooking over a real fire is best for making Chinese food. The smell of burning gas and oil from frying up food in a wok immediately take Shao back in time. For her, it's not just about food, but about the familiarity and warmth that remind her of home. Though she lived in the UK for many years, Shao never grew used to British cuisine. "I cooked for myself every day, but I wasn't able to recreate the tastes of my hometown, " Shao explained. "Maybe because the utensils were different, as well as the different ingredients such as lemon, rosemary and basil, which I hardly use when I cook in Beijing."Unforgettable recipe"Believe it or not, I can find my home just by the smell of my grandma's cooking," Andrew Chen, a businessman born in Taiwan who currently lives in Frankfurt in Germany, shared his memories about his family's cooking."Whenever I miss my mom's cooking, I just recall the smell and the recipe in my mind," Chen said. For him, remembering the smells of home is like having a conversation with himself. Through this particular type of meditation, he finds a bit of peace inside himself that strengthens his connection to his roots. One of the favorite meals he likes to whip up for himself when he is feeling homesick are bamboo shoots. When asked about whether he follows a particular recipe, Chen indicated that he doesn't follow any written instructions. "She planted that smell inside my mind," he said, his voice becoming a bit choked. "She passed away a long time ago, but I still remember that time when I had White Bitter Melon soup with her. We were sitting near the fire, smiling at each other."Chinese food isn't easy to find in Frankfurt, so cooking at home has become a routine part of his life. In his opinion, cooking isn't about skill but expressing your own emotions through food. Feeling out of place so far from home, cooking is a way to remind himself of his past."I am an actual foodie, but I always find it frustrating that I am unable to find the same ingredients as in Taiwan," Chen said. Because of the tropical weather, Chen said it is easy to get fresh fruit and vegetables in Taiwan. In order to make some family dishes, he occasionally asks friends to ship him fresh vegetables from home. "However, although it was fresh when it was packed, the taste becomes different after traveling thousands of miles by airplane," Andrew emphasized. "That is why I think it is impossible to make exactly the same taste as in Taiwan, no matter what kind of technique I use, the taste changes."