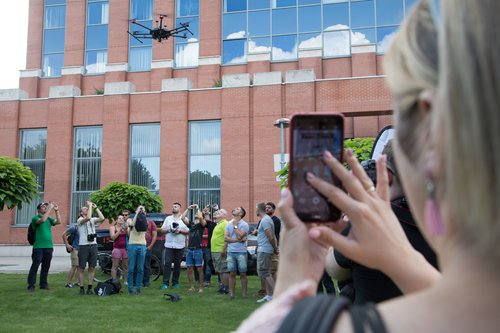 People watch a drone flying at an aerial photo workshop hosted by DJI in Budapest, Hungary on May 26. (Photo: VCG)

Cost-effective Chinese drones, including military drones, are getting increasingly popular overseas and rising to dominance in global markets, while still waiting for a market explosion at home where strict regulations dampen growth.Many domestic drone makers are eyeing overseas markets. For example, DJI Innovations, China's leading civil drone developer, currently has about 80 percent of its revenues coming from overseas markets, Xie Tiandi, head of public relations at DJI, told the Global Times on Sunday. According to Xie, DJI drones are now sold to more than 100 countries and regions in the world, with the US being the biggest customer, followed by the EU.Xie said that biggest application of DJI drones in overseas markets remains in the commercial area - movie and TV production and other forms of entertainment - but industrial drones are also gaining popularity in overseas markets. For example, many Japanese farmers are buying more and more DJI drones for crop protection purposes, he disclosed. Another domestic civil drone giant, Ehang, is now pushing test flight cooperation projects for its EHang 184 Autonomous Aerial Vehicle with a number of governments including those of the US, Dubai and Australia, a PR representative from the company told the Global Times on Sunday.The fast rise of Chinese-made drones in overseas market is due largely to their cost-effective nature, according to experts."Chinese commercial drones are much cheaper than locally made drones in those countries, but they offer very good quality, mainly due to low manufacturing costs in China," Ke Yubao, executive secretary general of the Aircraft Owners and Pilots Association of China, told the Global Times on Sunday.Ke stressed that exports of military drones are also rising. A report from Singapore-based Business Insider in November 2017 noted that made-in-China military drones, like the CH-3, are challenging the US' dominance in the military drone market. Sarah Kreps, associate professor of the Department of Government at Cornell University, told the Global Times in an earlier interview that some drones produced by China cost just a fraction of comparable ones made in the US, giving Chinese drones an advantage over US products in global trade. While Chinese drone makers prosper overseas, they face several challenges at home, including strict regulations for the use of drones and profitability.Ke said China's strict air traffic controls have restricted the development of commercial drones in the domestic market. "If the government would ease regulations in this sector, there would be an explosion of demand in China for commercial drones," he said.  But Ke said that not many of the domestic drone manufacturers are making a profit. "Now, getting financing is not as easy as a few years ago, so it's important for drone manufacturers to find a market position and a business model that can help them grow," he said.