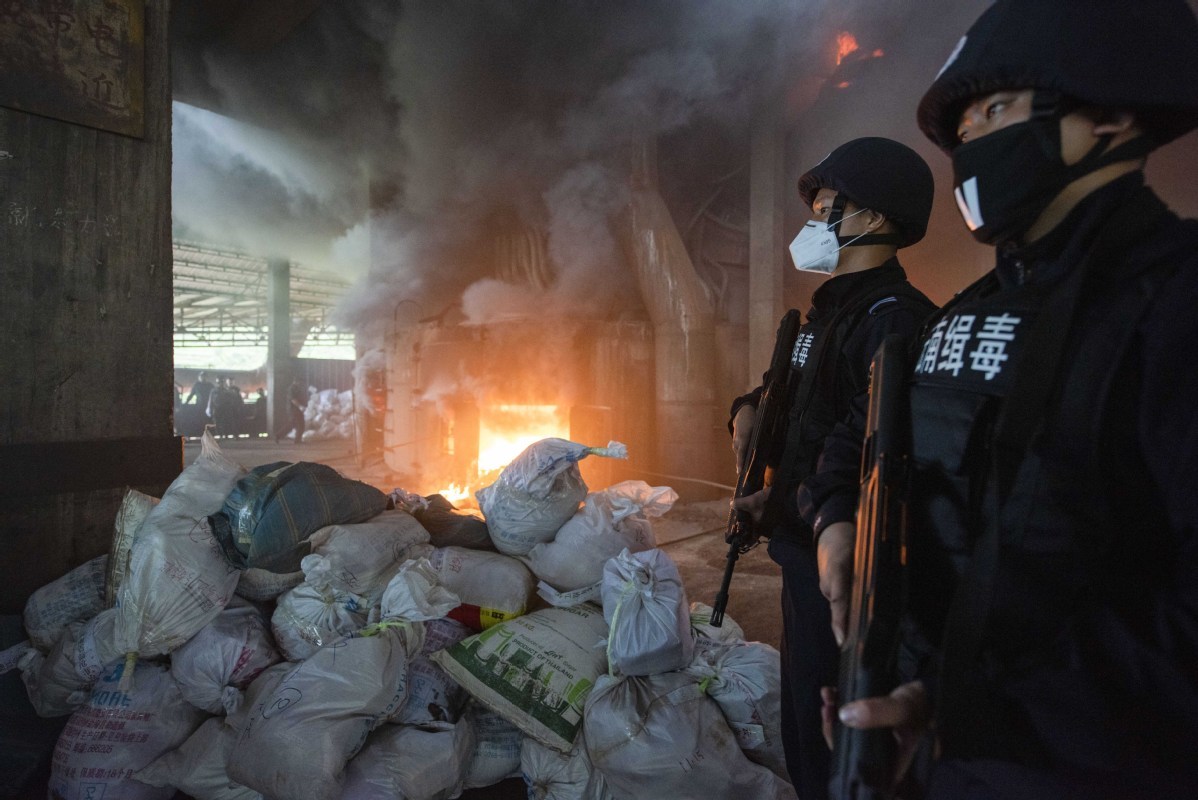 Report says domestic situation has improved due to targeted campaigns

The penetration of drugs into China from abroad has become an external threat to China's crackdown on drug crimes in recent years, a report released by the National Narcotics Control Commission warned on Wednesday.

But the report stressed that the drug control situation in China has improved. It showed that China cracked 83,000 drug-related crimes, arrested 113,000 suspects and seized 65.1 metric tons of various drugs in 2019.

To avoid investigation by public security organs, drug use has been occurring more at hotels, rental houses, private clubs and cars and other secretive places. Some addicts have even been using social networking platforms to set up certain groups for drug use and trafficking.

As domestic drug production decreases and the price of such drugs rises, foreign drugs are increasingly penetrating China, quickly seizing control of the market and filling the gap in demand. Of the 65.1 tons of drugs seized last year, 35 tons were clearly sourced from abroad, up 7.5 percent year-on-year. Authorities said they are confident that most of the other drugs seized also came from abroad, though their origin is uncertain.

The region bordering Thailand, Laos and Myanmar is a major source of drugs in China, producing massive amounts of opiates, methamphetamine and ketamine and exporting such drugs to China and surrounding areas. Last year, 82.7 percent of heroin, methamphetamine, ketamine and other major drugs seized nationwide came from the region.

Chinese Customs investigated and dealt with 268 cases involving marijuana smuggling and seized 252.1 kilograms of the drug last year. Due to the legalization of marijuana in some European and North American countries, the number of foreign employees and international students in China and people returning to the nation from overseas who purchased marijuana and its products from abroad via international postal parcels and air carriers has increased, the report said.

And domestic drug production activities have been effectively curbed, it said. A total of 290 drugmaking crimes were cracked and 173 drugmaking factories were destroyed. Drugmaking schemes are characterized by miniaturization, scattered distribution and simplified process. Some of them occur in family workshops and vans.

Last year, authorities uncovered 332 cases related to drugmaking materials and seized 2,313 tons of chemicals. Affected by the demand for raw materials at home and abroad, the manufacturing, selling and smuggling of raw materials to make drugs are still occurring. Some criminals register shell companies to gain business qualifications and licenses, and then use the company to trade, transport, store, import and export chemicals for drug manufacturing.