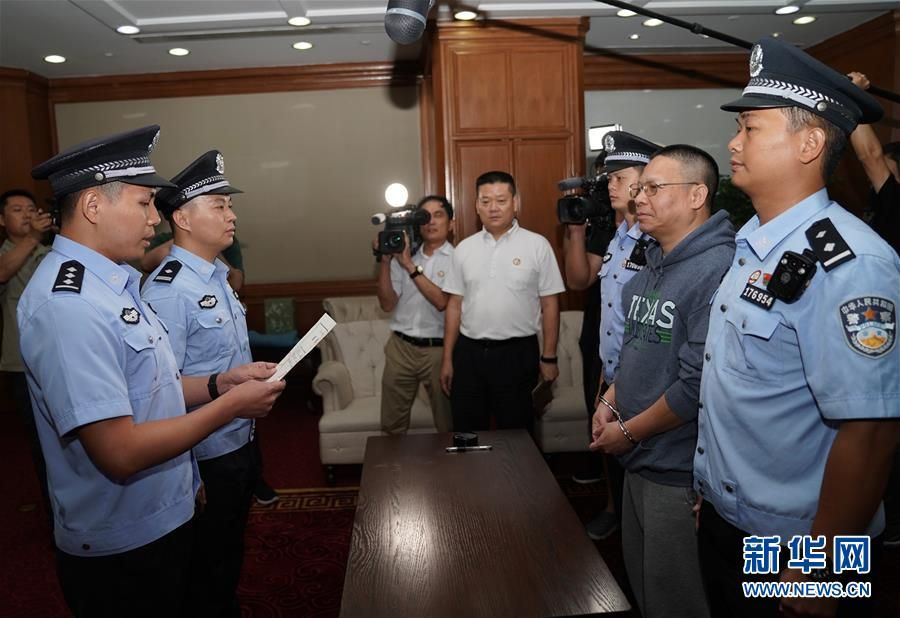 China has secured the return of three of its most-wanted fugitives listed on an Interpol Red Notice within a month, amid reinforced efforts to hunt down corrupt fugitives overseas.

Xu Chaofan, the principle in a 485-million-U.S.-dollar embezzlement case, the largest theft case of bank funds since the founding of the People's Republic of China in 1949, was repatriated back to China from the United States Wednesday after 17 years in the United States. He was arrested by the U.S. side in 2003 and sentenced to 25 years in prison in 2009.

Lai was involved in the same case as Xu.

The Interpol Red Notice of 100 Chinese corruption fugitives was released in April 2015.

Chinese authorities have adopted multiple measures to tighten the net on its most wanted, ranging from releasing detailed information on fugitives, including their possible current whereabouts, to an update on the handling of cases of fugitives who have either voluntarily returned or been extradited to China.

The Sky Net operation had captured 4,141 fugitives from more than 90 countries and regions and recovered nearly 10 billion yuan (1.5 billion U.S. dollars) as the end of April. So far, a total of 53 fugitives on the red notice have been captured.

Xu, the former chief of Bank of China Kaiping branch in south China's Guangdong Province, is the first suspect of a duty-related crime to be repatriated from abroad since the founding of the National Supervisory Commission in March.

The return of Xu and several other fugitives is also an important outcome of law enforcement cooperation on corruption cases between China and the United States.

The United States is one of the destinations of choice for fleeing Chinese corruption suspects.

So far, four of the five major fugitive hunt and asset recovery cases, identified at the 12th meeting of the China-U.S. Joint Liaison Group on Law Enforcement Cooperation in December 2014, have been solved.

Apart from Xu, Yang Xiuzhu, Huang Yurong, and Wang Guoqiang returned to China from the United States and turned themselves in to police in November 2016, December 2015, and December 2014, respectively.

Qiao Jianjun and his ex-wife Zhao Shilan, who are involved in the remaining unsolved case, are facing criminal proceedings in the United States.

"There is no safe haven abroad for offenders. Corrupt fugitives will eventually be brought to trial as China maintains a tough stance on fugitive search and illegal asset recovery overseas," said a statement released by the office in charge of fugitive repatriation and asset recovery under the central anti-corruption coordination group.

"I have been counting down the days over the past years during my time overseas. This was not the way out. No matter where you go, you will eventually come back," Xu told reporters upon his return to China.

"The only way out is to grasp opportunities, come back and surrender," he said.