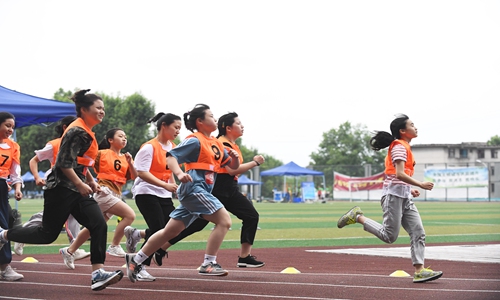 Students take part in a 800 meter sprint (female) sports test at Nanming district in Guiyang, capital of Southwest China's Guizhou Province on May 26, 2020 as part of the middle school's graduating students tests this year.  (Photo: GT)

As the COVID-19 epidemic continues, a total of six English proficiency exams scheduled for June have been canceled, which has hit Chinese students' applications for overseas study.

The continuous cancellation of such exams and recruitment events along with safety concerns have prevented students from submitting applications to schools in the pandemic-stricken regions, especially the most popular destinations such as the US and the UK.

Bai Limin, an expert in charge of undergraduate program applications with ZMN International Education, a Beijing-based educational consulting agency, told the Global Times that in his institute alone, the number of students applying for undergraduate programs in the US has decreased by 50-60 percent year-on-year from April.

A total of six English proficiency exams -TOEFL, IELTS, GRE, GMAT, LAST and FCE - in June will be canceled, China's National Education Examination Authority announced on Tuesday. The authority said the time is not yet ripe to hold the exams as examination locations overseas have remained closed due to the pandemic.

The British Council, the UK's international organization for cultural relations and educational opportunities, told the Global Times on Wednesday that the postponement of IELTS exams is because "the health, well-being and safety of all test takers is at the heart" of their work.

Many domestic exams slated for February and March have already been postponed, including Tests for English Majors (TEM), media reports said.

Bai said if such exams continue to be cancelled in August, Chinese students' plans to study abroad will be significantly affected.

A senior student at a Shanghai-based university told the Global Times that she has received offers from universities in the US but she decided to take a gap year because of the epidemic situation overseas.

Other destinations such as the UK also fear they could lose tens of thousands of Chinese students next year.

Zhang Jia, a graduate majoring in law, who is applying for her master's degree at King's College London in the UK, told the Global Times on Wednesday she was very upset and perplexed about her study.

She said it is very likely that she would spend an expensive tuition fee while having online courses at home if she gets the offer.

"I feel I am in a dilemma. On the one hand, I want to find a job in some top law firms. But those companies prefer to recruit candidates who have an educational background of studying overseas. On the other hand, the virus crisis is a barrier for me to go abroad and get a decent master's degree."

Schools in the US, UK and other foreign countries are trying to leverage virtual communications and webinars, offer online language testing in lieu of in-person tests, and extend application deadlines to reduce the effect.

A teacher of a Beijing-based senior high school said students who plan to study overseas are anxious about whether they will be able to go abroad to study this year, while those who have not yet applied are hesitant and cautious about their plans due to the pandemic.