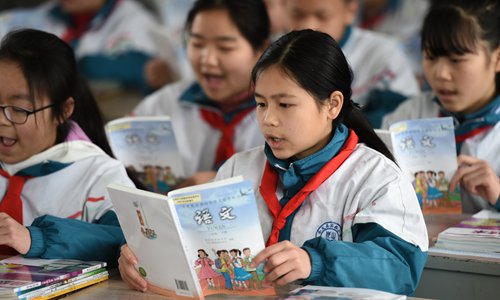 Students at a primary school in Yuqin county, Southwest China's Guizhou Province read from their yuwen, or Chinese-language, textbooks. With the conclusion of the winter vacation in late February, 2019, the new semester has started at primary and high schools across the land. (Photo: VCG)

China's Ministry of Education published the regulation on the management of school teaching materials on Tuesday, demanding all primary and junior high schools are not allowed to use overseas textbooks.

If domestic textbooks can't meet their needs, high schools, vocational schools and Chinese-foreign-run schools, are encouraged to use foreign textbooks that have been translated and published by Chinese publishing houses.

High schools, vocational colleges and universities can use overseas textbooks in accordance with relevant state policies, said the regulation.

According to a report by Guangzhou-based media outlet southcn.com on Tuesday, some schools in Guangzhou, South China's Guangdong Province have used overseas textbooks as a supplement to their English teaching. Most of the local schools said the new regulations will have little impact on their teaching as they had already made adjustments to their curriculum.

An anonymous insider was quoted by the report as saying that some textbooks, which are copyrighted by domestic publishers and published in China, are not regarded as overseas textbooks.

The regulation also said education authorities should revise the textbooks when the books have big disputes.

The authorities should carry out checks on the political correctness of textbooks, and focus on reviewing the books' political direction and values. "The political standpoint, orientation and standards should be organically integrated into the content of the textbook," said the regulation.

If an article in the textbook is negative and if the author's historical evaluation or social image is negative, or if there is a major dispute, the article must be replaced, according to the regulation.

Textbook writers and editors, whose political positions, values and morality are negative or controversial, must be replaced, it said.