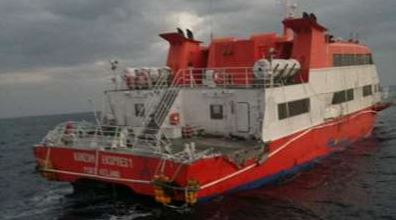 HANGZHOU, Dec. 19 (Xinhua) -- An empty passenger ship about 30 meters long was spotted some 500 km east of the city of Zhoushan in eastern China Tuesday morning.

Wang Weiping, captain of a local fishing boat, said the crew saw the ship at about 3 a.m. and tried to contact passengers using a loudspeaker as it was too dark for them to see the ship clearly. However, they received no response.

The crew members noticed some damage marks on the ship's body, but after boarding the ship, they found there were no signs of foul play. The boat later pulled the ship with a rope to the port of Zhoushan.

The maritime search and rescue center of Zhejiang Province confirmed on Wednesday that the ship belongs to a Malaysian company that purchased the small second-hand high-speed passenger ship from the Republic of Korea.

While it was en route from the ROK to Malaysia, the tugboat pulling the passenger ship broke down and its towrope broke during a storm. The passenger ship then went missing until it was spotted by the Chinese fishing boat crew on Tuesday.