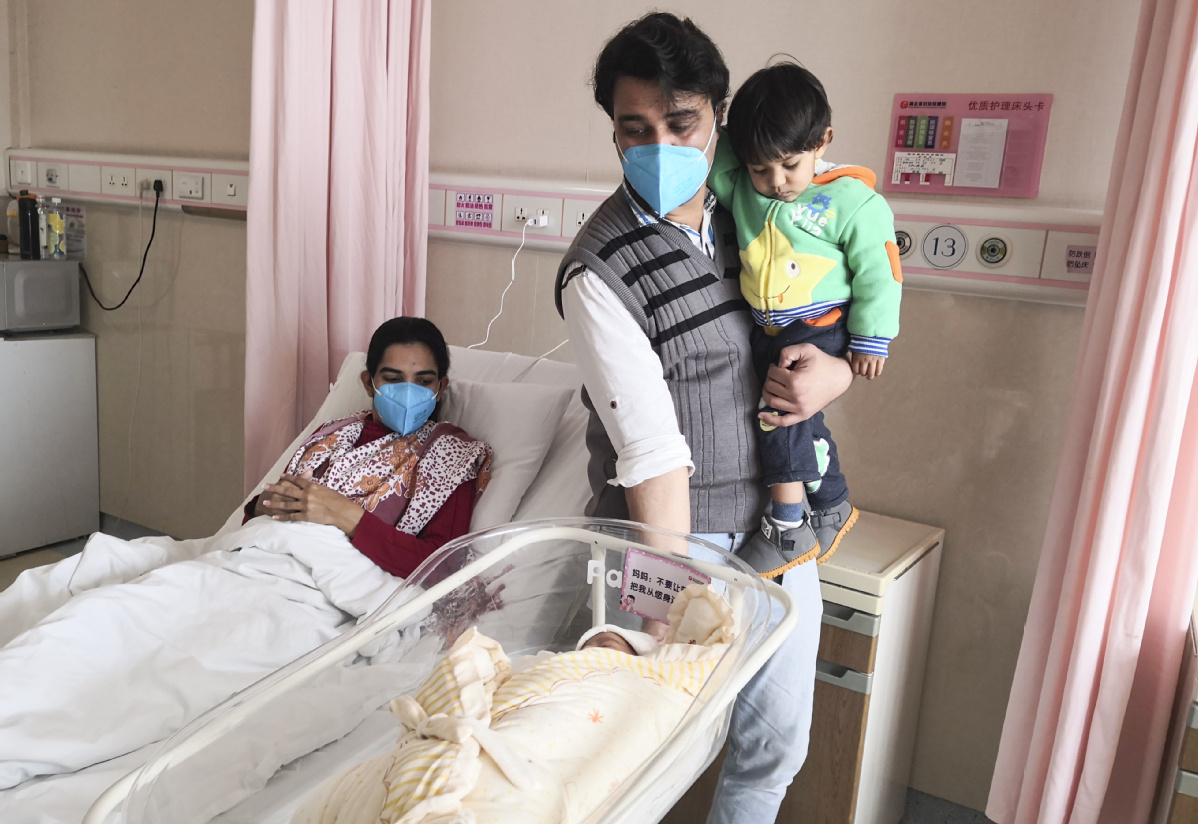 Pakistani Bushra Farooq, 32, a doctoral student in Wuhan, Hubei province, her husband and first child welcome the new addition to their family at a local hospital on March 14, 2020. (Photo: China Daily)

Holding her newborn daughter in her arms at the Maternity and Child Healthcare Hospital of Hubei Province in Wuhan, Pakistani Bushra Farooq beamed with happiness.

Farooq, 32, a doctoral student in environmental law at Wuhan University, gave birth on Tuesday and was discharged from the hospital on Sunday.

Her baby came at a time that the people of Wuhan are fighting against the COVID-19 epidemic, Farooq said, and she is thankful to all the Chinese people who helped her before, during and after the delivery of her baby.

"The Chinese government, local authorities, communities and my university have really helped us a lot, taking good care of us," she said.

Farooq came to Wuhan in September 2018 and will finish her doctoral studies in 2022. As her pregnancy progressed, her husband, Jawad Iftikhar, came to Wuhan in August to take care of her, together with her year-and-a-half-old son.

She had planned to go back to her hometown to deliver the baby, but Wuhan was locked down on Jan 23 because of the epidemic, and she was stuck in the city.

Farooq said that at first she didn't know how to handle the situation, so she approached the Poly Huadu Community where she lived for assistance.

"With the help of the Chinese people, everything went so smoothly," she said. "And now I'm happy to deliver my baby here."

Xu Hezhao, who works for the Hubei Provincial Communications Administration, took on the responsibility of helping the Pakistani on Feb 29.

After the outbreak, Xu, in his 20s, was sent to Farooq's community as a volunteer to assist community workers with epidemic prevention and control. When Farooq asked the community for help, Xu volunteered his services.

"Pakistan and China are ironclad friends. When our friends have problems, we are naturally in the position to help them," Xu said. "I tried to learn about their needs, though my English is not good. Basically, we have no problems in communicating with each other."

With the expected birth date drawing near, Farooq was hospitalized on March 9, thanks to Xu's help. The next day, she delivered her baby by C-section.

The operation went smoothly and she recovered well, said Ren Wei, the doctor who operated on Farooq. The baby is also in very good condition, Ren added.

The hospital provided a single room for Farooq, considering her husband and little son need to be with her, the doctor said, and the medical workers help them order food from a local Muslim restaurant.

Farooq praised the hospital's doctors and nurses, saying they are "very kind and professional". "Thanks to their help, we don't feel we are out of our country," she said.

Farooq said she read the news about the coronavirus epidemic daily and was impressed by the measures the Chinese government has taken to curb the spread of the virus.

"No other country but China can deal with the outbreak so fast and actively," Farooq said. "The Chinese government treats us like its own people. We didn't have any difficulties in this situation."

Iftikhar said he appreciates the Chinese government and people taking care of his wife and family, and he hopes the country will soon be free of the difficulties caused by the epidemic.