Palace Museum apologizes after car spotted in its restricted premises 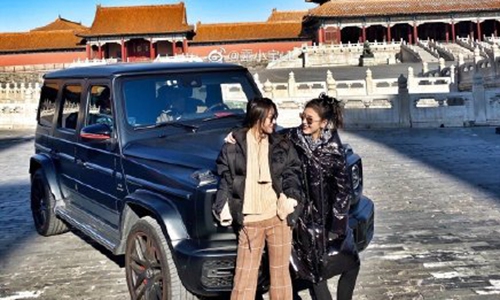 China's Palace Museum tendered an apology Friday evening after two women drove a private vehicle into the palace premises in violation of the rules, and vowed to strengthen management to prevent similar incidents.

A post capturing a vehicle parked in the premises of the Palace Museum dubbed as the Forbidden City, went viral on China's  Twitter-like social media platform Weibo on Friday, stoking controversy as private cars are not permitted in the world-famous historical site to preserve the preciousness of the cultural relics.

Several pictures of two women, in fashionable outfit standing in front of a Benz Jeep parked in one of the courtyards of the palace, were posted by a Weibo user LuxiaobaoLL. The now-deleted post sparked a heated discussion online. Some internet users fiercely slammed the duo, who appeared visibly rich, for misusing their social status, as the Palace Museum does not allow the entry of any private vehicle inside.

"As it's closed on Monday, we avoided visitors flow, and enjoyed the place," LuxiaobaoLL wrote in another post, which has also been deleted. According to media reports they stood in the square of Taihemen.

Shan Jixiang, the former director of the Palace Museum, according to media reports, explaining the reason behind restricted entry of vehicles noted that from Buckingham Palace in the UK to the Palace of Versailles in France, cars are all not allowed as it's a question of respecting the culture.

Even foreign state guests or foreign heads of state have not received "special treatment" of entering the palace in their cars.

Many netizens were concerned as this might damage the floor tile of the 600-year-old palace. "Many of the tiles can be traced back to hundreds of years, and they are often carefully examined by museum workers," noted one netizen.

When former French president Francois Hollande visited the Palace Museum in Beijing in 2013, his car was parked in front of Meridian Gate, Wumen in Chinese, and he was the first foreign head of state to walk inside in more than ten years, media reports said.

The original post despite its deletion was the top trend on Weibo, as many netizens expressed their outrage, some even questioned as to why the women could enjoy superior treatment than a foreign head of state.

Some also called for finding out the background of the women while questioning if the palace would strictly adhere to the guidelines set for the protection of cultural relics.

According to the Weibo bio of the woman who posted the pictures, she is a flight attendant at Air China. However, the airline said she already quit.