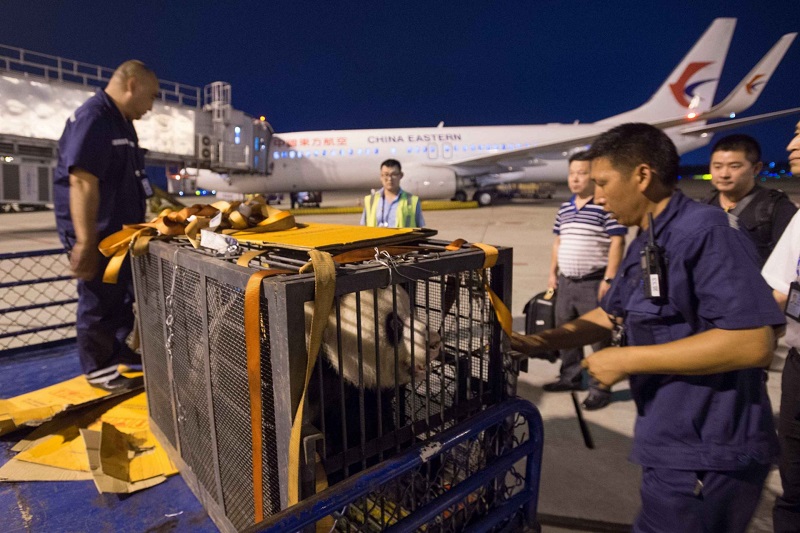 Weiwei, a panda allegedly mistreated at Wuhan Zoo in Hubei Province, arrives at Chengdu Shuangliu International Airport in Sichuan Province on Wednesday. It will receive further checkups at a breeding base in Sichuan. (Photo: cnhubei.com)

A giant panda named Weiwei returned to Sichuan Province on Wednesday night after allegedly being mistreated by a keeper at the Wuhan Zoo in Hubei Province.

The keeper, who has been suspended by the zoo, was seen in a video smoking and washing while attending Weiwei. The video went viral online and aroused people's concerns about the panda's health, Beijing News reported on Wednesday.

Other pictures and videos posted by netizens showed the keeper feeding Weiwei an ant-infested apple, and Weiwei's nose was turning white and its palms and genitals were losing fur, the newspaper said. The zoo said on Tuesday that it had suspended the keeper and would strengthen management of its staff. Considering that a new panda hall under construction would disturb the panda's living environment, it decided to send Weiwei home to Sichuan.

Weiwei came to Wuhan Zoo 10 years ago after the devastating Wenchuan earthquake struck Sichuan. The panda gained 30 kilograms while living in Wuhan.

An average 1.5 million people have come to the zoo annually to visit Weiwei, including many children on Aug 29 to celebrate the panda's birthday.

According to the zoo, Weiwei receives checkups twice a year and gets behavioral training to communicate with the keepers. The zoo said last year's checkup showed that Weiwei was in good condition and spirits, but did note that some white spots had begun to appear around Weiwei's nose and eyes.

The Wuhan forestry bureau said in an announcement in August that the white spots might have been caused by insufficient exposure to the sun, a problem many captive animals face.

In January, the bureau released its plan to build the new panda hall. The current hall was built in 1999, and the facilities no longer meet national standards for raising pandas.

According to the bureau, the new hall will have separate sections for indoor and outdoor activities, and will add new trees, toys and bathing tubs. It will be spacious enough for three pandas to live together.

Construction of the hall started this month and is expected to conclude at the end of this year.