Strict pandemic control measures and a successful crackdown have reduced drug crimes in China by stemming the flow of drugs being smuggled into the country, a drug situation report released last month said. 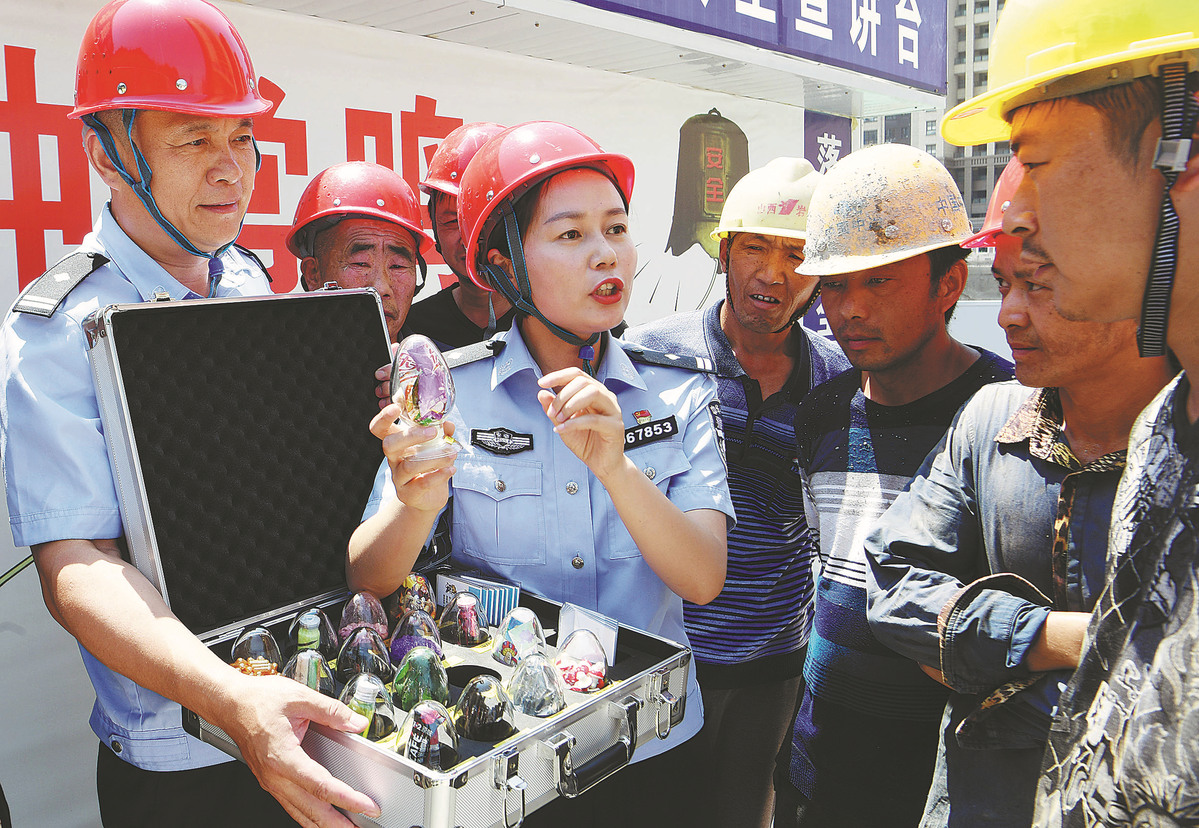 A police officer warns about the harm that drugs can do at a construction site in Bozhou, Anhui province, in June. (Photo: China Daily)

The Drug Situation in China (2020), issued by the National Narcotics Control Commission, said the positive trend in drug control had been consolidated.

It said the vast majority of drugs in China come from the Golden Triangle region, where Thailand, Laos and Myanmar meet.

Both traditional and synthetic drugs entered China from the Golden Triangle, the report said.

Chinese police seized 6.3 tons of heroin and opium from the region last year, accounting for 96.2 percent of the amount seized in the country, and 18.8 tons of methamphetamine and ketamine, 83.1 percent of total seizures of those drugs.

Due to the strict pandemic and border control measures, a large quantity of drugs from the region had been stockpiled near the border, and drug traffickers were looking for opportunities to transport drugs to China and Southeast Asian countries, it said.

To prevent drugs from the region flowing into China, the commission and the Ministry of Public Security launched an operation named Jingbian in 2018 to target drug crimes in border areas, with the southwestern province of Yunnan the main focus.

The operation expanded to Guangdong province and the Guangxi Zhuang autonomous region last year, and police focused on the whole criminal chain, including the control of illicit manufacturing and the rectification of the logistics industry to contain drug smuggling, the commission said.

The flow of heroin from the Golden Crescent region－where Afghanistan, Pakistan and Iran meet－cocaine from South America and marijuana from North America increased last year, the report said.

The drugs were mainly hidden in ship-borne cargo or international mail packages and entered China through southeast or east coast cities.

Due to the anti-drug crackdown and intensified controls on precursor materials, the output of domestic drug manufacturing declined last year, along with the market share of domestically manufactured drugs.

But drug manufacturing could still rebound, the report warned. With the normalization of pandemic prevention and control measures, domestic drugmaking activities rebounded in the second half of last year, with the number of cases solved increasing 26.2 percent year-on-year, and the number of manufacturing places destroyed up by 33.6 percent year-on-year.

Intensified control of precursor chemicals, including tightened border inspections, reduced the amount of regulated chemicals on the control list that flowed into illegal channels.

However, drug manufacturers resorted to purchasing precursor chemicals that are not on the control list in a dispersed manner before synthesizing them into the required raw materials, making supervision, investigation and blocking of such activities more difficult, the report said.

The commission said it would focus on the prevention and control of risks associated with new drugs this year by improving drug control in key sectors, setting up demonstration programs and stepping up governance of drug problems in rural areas.

It said it would also strengthen preventive education, monitoring, international cooperation and the control of precursor chemicals to resolutely tackle drug problems.