The outbreak of COVID-19 has promoted the development of the “unmanned economy.” As the novel coronavirus spreads in China, robots are being used to deliver food and do sterilization in hotels and hospitals where suspected cases of coronavirus are isolated in order to reduce the risk of infection.

Contactless distribution can be seen in a hotel used as an isolation area of suspected cases in Shanghai. The staff hand the lunch box to the robot and enter the room number on the touch screen. The robot then goes into the room by itself, and informs the people in the room to take the food.

The robot was developed by Keenon, an intelligent technology start-up founded in 2010 in Shanghai. The high-tech robot can walk safely and detect the presence of humans through sensors. The company provides products for hotels and hospitals in more than 400 cities in China. 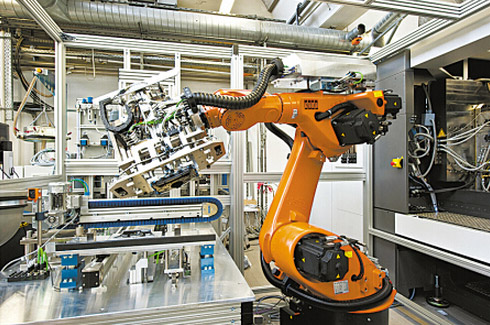 Since the outbreak of the pandemic, the company has provided Hubei with about 100 robots. Chi Xiaomin, the company’s head of public relations, said the sales volume of the company in 2019 was 3,000, and it plans to sell 10,000 in 2020, due to the surging demand for robots this year.

Robots have previously been used in confined spaces such as factories and warehouses. Today, they can be used in open spaces with people because they can take diverse and safe actions by using the same control technology as self-driving cars.

Affected by the novel coronavirus, the demand for robots will further increase, according to Hao Yucheng secretary general of the China Robot Industry Alliance.