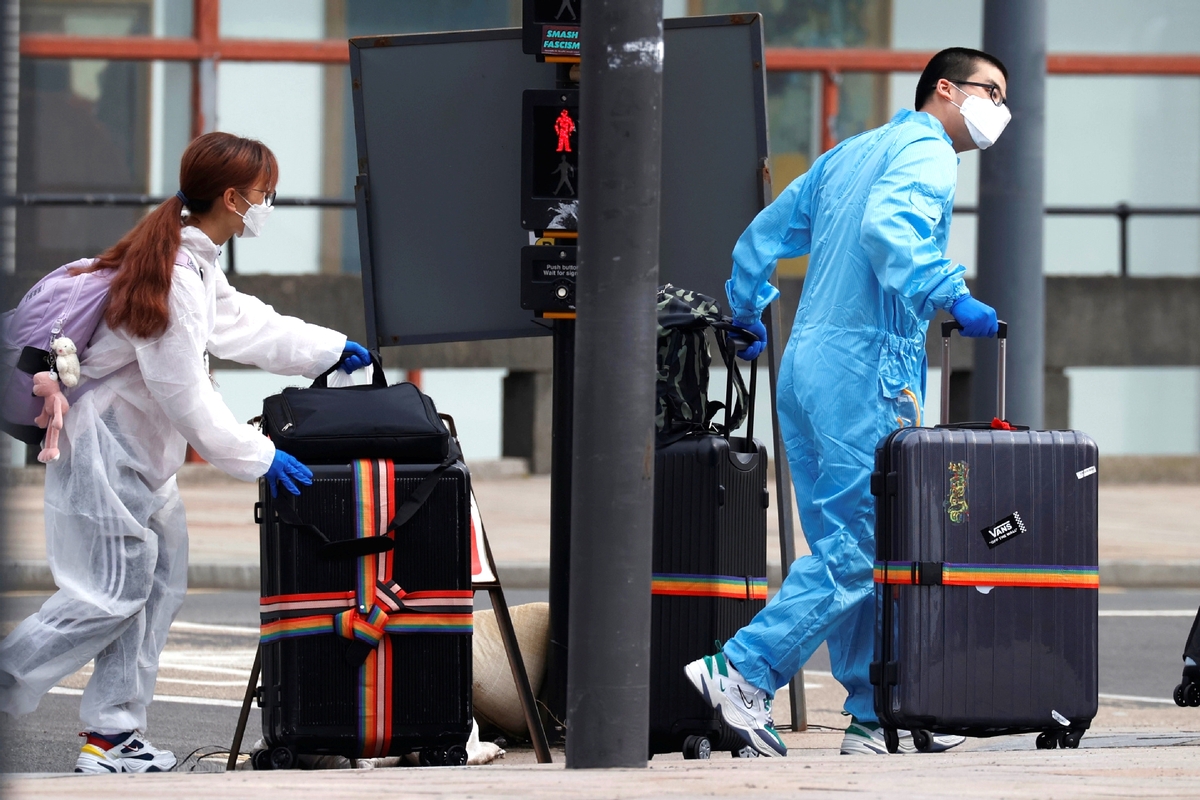 Students wearing protective face masks and clothing are seen with suitcases leaving their halls of residence at Liverpool University, as the spread of the coronavirus disease (COVID-19) continues, Liverpool, Britain, April 12, 2020. (Photo: Agencies)

Britain's quality education has been highly attractive to hundreds of thousands of Chinese over the years, but many such students now face a dilemma: should they stay where they are and push on with their studies, or should they return to China, where they may feel safer?

As British universities have closed, meaning students have to do remote learning, many Chinese have opted to go home.

Luo Hannan, a health economics master's student at the London School of Economics, said she was fortunate that she decided relatively early to take a flight back to China, which cost 3,252 Chinese yuan ($458 or 370 pounds) from London to Shanghai via Moscow.

Even given the risk she might have exposed herself to during the long-haul international flights, Luo said she still thinks it was wise to return home given the unclear safety guidelines issued by the British government at the time. "I had to return to China anyway, otherwise I would have had to overstay my visa due to the lock down or canceled flights."

Another consideration was whether overstayers would receive proper healthcare, which was unclear at that time, given the limited health resources in the UK.

"So, it was better to return as soon as possible for me," she said. "Also, as COVID-19 was not as lethal as Ebola, even if I caught it during the flight, I would definitely get timely and affordable treatment in China."

Now, as commercial flights between the two countries have been suspended, securing a seat on a flight to China could cost as much as a few thousand pounds, for a trip involving numerous possible stopovers.

"A lot of my Chinese friends are struggling to return to China," said Zheng Luyao, who is studying for a master's degree in international relations at the Oxford University. "Despite the 14-day quarantine policy upon arrival, which causes inconvenience, many students are determined to return. They paid up to 6,000 pounds for a ticket, and some even bought multiple flight tickets because of cancellations."

As many UK-based Chinese students faced difficulties in getting back to China because of the pandemic, China's Foreign Ministry arranged a charter flight, in coordination with the Civil Aviation Administration of China, to bring the students back on April 2.

For Zheng, it was tough deciding on whether to return home or continue staying in the UK, and she took many days to discuss her options with her family before finally deciding to stay.

"I am not alone in the UK, because my sibling and boyfriend are here as well. So if the situation really gets serious we can we can take care of each other.

"My long-term plan is to work in the UK given that I have already received a job offer," she said. "Returning to China and flying back to the UK after the pandemic could expose me to even more risks. Hence, I chose to stay and self-isolate," Zheng said.

There are signs of anxiety among Chinese students who are in the UK.

"All my friends and classmates are concerned at the moment, not just Chinese students," Zheng said. "Academic work is also being affected, and it is very hard to focus on your studies at such a difficult time.

"Anxiety is often neglected in the policy-making process, but it has a profound impact on young and international students. My course mates have been organizing virtual meetups to offer peer support," Zheng added.

The UK has more than 220,000 Chinese students at 154 universities and about 15,000 Chinese teenagers at more than 1,000 British private schools, making China the top source of overseas students in the UK, according to the Chinese embassy in London.

All schools and universities in the UK were asked to close from March 18 as part of the government's emergency measures to halt the spread of the coronavirus, and the educational establishments across the country have been moving to online teaching.

Commenting on the trend, Xue Qinbing, a master's student at a London university, who recently returned to China, said: "For lectures, where lecturers are talking most of the time, I prefer video because the function of replay is very helpful as I could pause and take notes; whereas for seminars, I think it is more productive to be in class, because online delivery takes away the element of interaction between the participants, and the ambience is not usually that good."

Steve Spriggs, managing director at the London consultancy William Clarence Education, said: "I think that ultimately there is no real like-for-like replacement for in-person teaching. It's one of the oldest activities in the world－teaching a skill to someone else in person.

"Online is a great tool and has meant the transfer of skills across the globe in real time, but I don't think it's a long-term solution until artificial intelligence and augmented reality get to such a standard where a real person is interchangeable to a digital person delivering the same material," Spriggs said.

While there was no option but to stop in-person lectures for the UK universities, some industry experts said they could still be creative as the UK has a strong tradition of innovation in education.

"Ask students to submit reports by video, have them conduct experiments at home, align studies with the context－psychology students should be studying the effects of isolation, and English literature students reading tales from prison－and give both students and teachers the freedom to turn crisis into opportunity," Rowe suggested.

She highlighted the importance of being empathetic and compassionate, especially with international students, saying "UK universities require a considerable amount of independence from their students during normal times, but now is the time to check in with students oneon-one and make sure everyone is safe. Sending out blanket emails is hardly reassuring."

Experts say the schools' shutdown in the UK will also see a drop-off in the recruitment rates of most British universities, especially for those who often bring in students for May intakes.

According to Spriggs: "Open days, interviews, school tours and international student visits are all canceled. And January to May as key recruitment season has not happened. So, come September there may be half empty or totally empty classrooms where schools are dependent on international students.

Lewis Chen, marketing manager at an education adviser United Kingdom Education Centre, said "I think a wise move for many institutions would be to look to create a January intake for 2021.

By making this provision, or building on the existing course portfolio entry for January, universities can balance of the intake so that they are not reliant on one major entry point, but rather spread their intake more evenly through the year," Chen said.

Though COVID-19 has brought upheaval to university life for hundreds of thousands of students in Britain, Christopher Bovis, a professor at the University of Hull in northern England, does not see the disruption as causing long-term damage to the country's tertiary education market.

Bovis said: "The UK has a unique position in global higher education where quality of educational and research play a significant role in its economy … so the standards, the quality and reputation of the higher education system will not be affected by the current pandemic.

"China is a major market for higher education institutions. COVID-19 is a temporary obstacle to a global market," Bovis said.