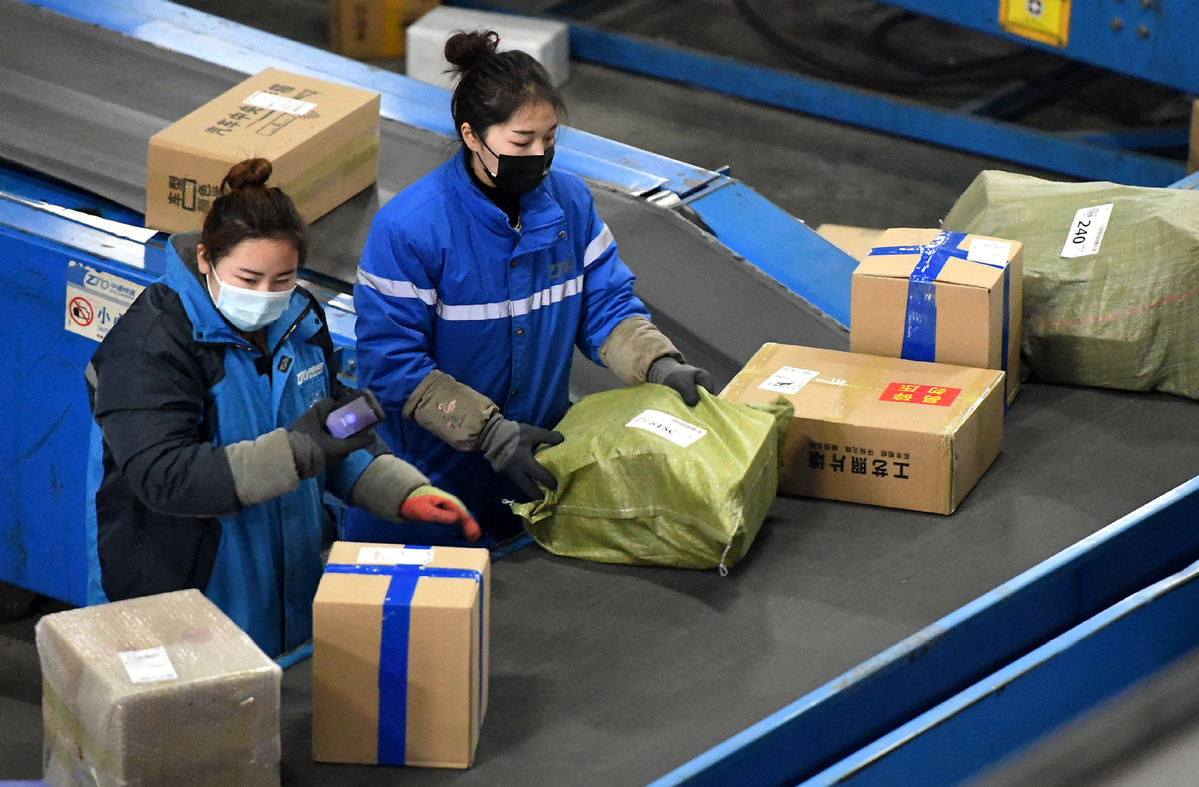 Although China's Spring Festival travel rush was a muted affair this year due to the nation's coordinated epidemic containment measures, the number of parcels delivered and received greatly increased as a large number of people chose to spend the festival and their money locally.

According to the State Post Bureau of China, 365 million parcels were delivered and received from Feb 11 to 15, the first five days of the weeklong holiday, a year-on-year increase of 224 percent.

The number of trips dropped during the holiday due to the intensified measures to contain the recent cluster of COVID-19 cases and the authorities encouraging people to stay put.

According to the State Council's Spring Festival travel rush office, 77.24 million passenger trips were made from Feb 11 to 16, the first six days of the holiday, a decrease of 76.4 percent compared with the same period in 2019 and a 43.1 percent drop compared with last year. Of these trips, 17.47 million were made by rail, 54.82 million by road, 2.42 million by water and 2.53 million by aircraft.

Spring Festival is the most important holiday for family reunions in China, and it usually leads to huge holiday traffic.

This year, people were encouraged to avoid traveling but their gifts to family and friends can still "travel "for them.

From Jan 28 to Feb 11, the first 15 days of the 40-day travel rush, 52.33 million trips were made by rail, a decline of 68.8 percent year-on-year, according to China State Railway Group, the national railway operator. Meanwhile, 155.62 million metric tons of goods were handled by the railway network, an increase of 8.9 percent compared with the previous year.

On Feb 11 and 12, Lunar New Year's Eve and Lunar New Year, the first two days of the weeklong holiday, 130 million parcels were handled across China, a year-on-year increase of 223 percent.

Chen Bin, a Beijing courier for ZTO Express, one of China's major express delivery companies, worked through the holiday in the capital to earn more money.

The native of Shaanxi province said the company was short-handed during the festival and he preferred to stay in Beijing.

The company tripled the salary paid to delivery workers from Feb 8 to 18.

"My wife and daughter celebrated Lunar New Year at home, and I can earn more here in the capital for my family," he said.

She stayed in Beijing and sent a sweater and a scarf to her parents as holiday gifts.

"Having the spicy meat sauce made by my mother on the Lunar New Year's dinner table was a comfort," she said.

She ordered meals and daily commodities online during the holiday.

"The service fee was higher, but this was acceptable, as it is Spring Festival and couriers are sacrificing their family reunions to provide services to people like me," she said.